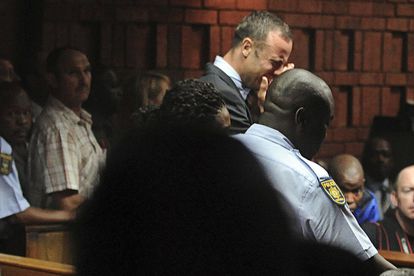 In the dock: Pistorius’ stands accused of murder.

In the dock: Pistorius’ stands accused of murder.

1) ANNAMARIE UP TO HER OLD TRICKS
It wouldn’t be a Pistorius trial without disturbance caused by the infamous Annamarie. The woman, who is only identified by her assumed first name, had attempted to interrupt the bail hearings in the Pistorius case last year already and went on to try the same on the first day of the actual trial, claiming she needed to speak to the judge, Dunstan Mlambo.

It is unknown what Annamarie is trying to accomplish with her repeated interruptions, but she insists that Oscar Pistorius needs to be psychologically evaluated on account of allegedly having known Oscar Pistorius’s mother.

2) ENCA LEAKED PICTURE MICHELLE BURGER
After waiting with bated breath to hear whether the media would be allowed to be present in the court room during the Pistorius trial, we learned last week that a generous compromise was offered, which would keep the media happy. However, as part of the deal the court offered witnesses that they could keep their appearance hidden.

That safety precaution lasted for about five minutes, as eNCA leaked an image of first day witness Michelle Burger from her online profile at her employer’s website, the University of Pretoria, where Burger works as a lecturer. The South African television network apologised for the mistake, sending media relations during the trial off to a rocky start.

3) AFRIKAANS INTERPRETERS FAIL
On the first day of the trial, the court proceedings were only started about 90 minutes after had originally been intended, as a last-minute scramble to find an interpreter turned into an unforeseen challenge. The original interpreter assigned to the case had dropped out in the last minute, making it impossible to proceed with the first witness, Afrikaans-speaking Michelle Burger, one of Oscar Pistorius’s neighbours.

In the end, a replacement was found but proved to be somewhat lacklustre in her translations – so much so that Mrs. Burger didn’t mind speaking in English in the end. Of course this awkward episode couldn’t be any more reminiscent of the notorious blunder with the sign-language interpreter at Nelson Mandela’s memorial service last December.

4) NOT GUILTY ON ALL ACCOUNTS
Pistorius pleaded guilty on all accounts, which is not surprising seeing that his legal team is trying to challenge the very premise of the case against Oscar from the start. However, the information that is overlooked here is that during the entire year leading up to the trial, Pistorius must not have agreed to any plea-bargain with the prosecution – or else he might have conceded at least some of the four charges, such as reckless discharging of a firearm in public.

In a high-profile case such as the one of Pistorius, the prosecution may seek harsh penalties to make an example of well-known personalities, but also seeks tends to seek out cooperation with the defence to make the trial easier and more straight-forward. It is unknown what aces Pistorius’s legal team may hold up their sleeves, but Oscar appears to rely on them confidently.

5) JUNE STEENKAMP CAME OUT OF HER HIDING
The Steenkamps had not exactly been quiet since the death of Reeva Steenkamp on Valentine’s Day 2013, but in preparation of the trial things had gone quiet around the bereaved family from Port Elizabeth. But then June Steenkamp appeared at the trial, announcing that she was eager to see Oscar Pistorius face-to-face. With the accused sitting with his back turned, it is uncertain whether she got what she had wanted. Still, she was merely a metre or two away from the man who is responsible for her daughter’s death and who hasn’t always shown a repentant face.

Her husband Barry was not in attendance, having previously suffered a stroke. The family had spent months ironing out an out-of-court settlement with the Pistorius family, avoiding a civil law case following the criminal proceedings.  Steenkamp also shared with the press that she would only be present for the opening and the final verdict, as she did not want to have to repeatedly listen to the minutiae of her daughter’s death

6) OSCAR’S STELLAR DEFENCE TEAM MET THEIR MATCH
Starting on day one, Oscar’s aggressive representative Barry Roux started grilling his witnesses decidedly. While cross-examining Michelle Burger, Oscar Pistorius’s neighbour, there was no holding back, as he pushed the envelope trying to discredit her version of events, implying that what she may have thought were gunshots may in fact have been Oscar trying to break the toilet door down with a cricket bat.

But to everyone’s surprise, Roux may have met his match in a defiant Michelle Burger, who when asked how she slept after the trauma of listening to the supposed shots and screams that night, replied: “My sister’s baby died on Friday night. I slept. I sleep after traumatic events.” When later asked whether she knew what gunshot sound like and when she had last heard term, Burger said calmly: “14th February 2013”

7) PISTORIUS SCREAMS LIKE A GIRL
The kind of hero-worship culture that athletes like Oscar Pistorius enjoy in South Africa is often magnified by a machismo attitude attributed to such sportsmen. However, to hear forensic evidence in court that Pistorius’s voice – when under stress (such as it would be after a murder) – would easily resemble that of a woman was something unusual, to say the least.

Barry Roux, Oscar Pistorius’s top lawyer, claimed that he will prove in the course of the trial that Oscar’s voice would hit the pitch of a woman’s, discrediting claims by neighbours such as the Burgers that the screams they had heard that night could only be those of Reeva Steenkamp’s uttered as part of a struggle.