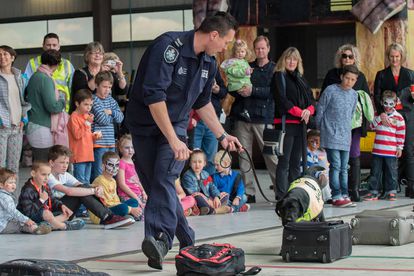 A police sniffer dog gives a display at an Australian airport. If dogs can detect drugs, why not Covid? Photo credit: Wikimedia Commons

A police sniffer dog gives a display at an Australian airport. If dogs can detect drugs, why not Covid? Photo credit: Wikimedia Commons

Around the world health experts, medical researchers and governments are coming to the realisation that highly sensitive noses that are able to sniff out drugs, explosives, bodies hidden under rubble, cancer cells and impending epileptic fits can probably also detect COVID-19 traces as well.

Pilot projects are underway in several countries with generally positive results, with governments liking the added benefit of a relatively quick and cheap rollout, compared to the mega-millions that must be spent to bring more traditional testing programmes to large numbers of citizens.

Any breed may be able to do the job

In the UK, for example, it is estimated that the implementation of a mess-testing project dubbed Operation Moonshot would likely cost an eye-watering £100-billion (R2.2-trillion).

It seems, too, that virtually any breed of dog with appropriate training would be able to do the work.

In Finland, for example, four COVID-19 sniffer dogs have begun working as part of a state-funded pilot scheme at Helsinki airport.

So far, dogs are nearly 100% accurate

Passengers arriving at the airport serving the Finnish capital and surrounds are asked to dab their skin with a wipe, which is placed in a beaker next to others containing control scents. If the dog indicates that it detects the virus, the passenger takes a free swab test to confirm the dog’s assessment.

In preliminary tests, the Helsinki airport dogs have been accurate almost 100% of the time.

The dogs also need a far smaller sample – only 10-100 molecules to detect the presence of the virus. A medical laboratory, by contrast, requires millions of molecules for its sample.

Dogs are not at risk, say the experts

Animal lovers, understandably, are quick to ask whether this puts the dogs at risk. Apparently not.

According to researcher Anna Hielm-Björkman, who also works with dogs that detect cancer in human samples, dogs do not have the receptors necessary for the corona virus to gain a foothold.

“This research has exceeded our expectations,” Hielm-Björkman said. “The dogs have identified cancer and other diseases in the past, but we have been surprised at how much easier it is for the dogs to spot corona.”