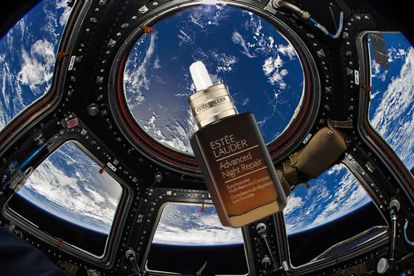 Slick-talking marketing managers and hype-loving advertising agencies are fond of phrases such as “taking our product to new heights”.

Frequently there’s more than a little poetic licence involved in making such fanciful claims. But, in the case of global cosmetic giant Estée Lauder, it’s spot on.

On Tuesday night (US time), the company is scheduled to send 10 of its 50 ml bottles of Advanced Night Repair serum hurtling into space aboard a Northrop Grumman Antares rocket that will take the products to the International Space Station orbiting 400km above the earth.

Astronauts will photograph the bottles

Once aboard the space station after a three-day journey, astronauts will photograph and film the bottles floating in front of the Earth-facing windows in the station’s cupola for a social media marketing campaign.

The company is also planning to auction one bottle off for charity when the items return to Earth next year.

Perhaps surprisingly, the campaign will turn out to be cheaper than hiring a big-name celebrity or social media influencer to endorse the product and front the campaign.

Company is paying just over R2-million

There’s also the added benefit that ‘space’ is unlikely to become involved in some sordid Hollywood affair that would necessitate pulling the campaign and starting again from scratch.

According to a report by news agency Bloomberg, Estée Lauder is paying NASA only around $128 000 (R2.2-million) for the project.

It is part of a new NASA programme that devotes five percent of its space station activities to commercial and marketing-focused projects.

The agency is allowing the commercialisation of the space station so it can eventually redirect the money it spends on low-Earth orbit activities to future, hugely costly, deep-space exploration missions.

“We really believe this type of activity can help catalyse and expand space exploration markets for many businesses by demonstrating the value of conducting commercial activities in space,” said Phil McAlister, Director of Commercial Spaceflight Development at NASA

“We also think there is value from a large, well-known company, such as Estée Lauder, being among the first companies to take advantage of our commercial use policy.

“We really hope that this will increase awareness of these opportunities among the commercial community,” McAlister said.