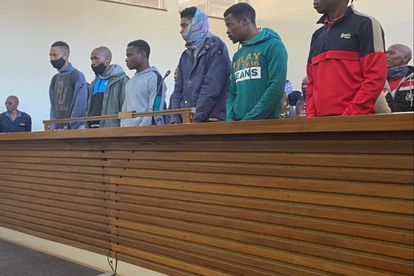 A taxi owner who allegedly transported illegal miners to and from Shaft 2 of the Orkney mine, while also taking them food, has been added to the list of suspects.

In September last year, the Hawks received information of an illegal mine shaft in Orkney, North West.

When the multidisciplinary team, including the National Intervention Unit, District Combatting Unit, arrived at the illegal mine shaft in October, they were met with gunfire.

A shootout ensued between the illegal miners and the law enforcement team.

Six illegal miners were killed, eight were injured and 87 others were arrested. The eight have since been discharged from hospital and are now in police custody.

Bags of food were also discovered.

The large group appeared before the Stilfontein Regional Court this week. But an 88th suspect was added to the charge sheet.

“He appeared with the other 87 accused. Hawks’ investigations revealed that Boyce is a taxi owner, who allegedly transported the suspected illegal miners to and from the mine, and also transported food. His taxi was seized by the Hawks after his arrest.”

In the last three postponements, the defence attorney had promised to provide the state with a hard drive. The state was to then provide the content of the docket, which includes video footage.

But this did not happen, said Mamothame. Instead, the attorney stated that the families of the accused failed to cooperate after they committed to providing him with the hard drive.

“He recommended in court to provide it on 30 August 2022, as instructed by the court. The Magistrate indicated that no further postponement will be granted, and instructed the attorney to ensure that the hard drive is provided on the agreed date.”

While the 87 remained in custody, they changed their minds about abandoning bail. The group had initially denied applying for bail due to their illegal status in the country.

“They [have now] indicated to the court of applying for bail and have appointed a different attorney to represent them just for this application.”

The matter is postponed to 6 September for docket and consultation, said Mamothame.