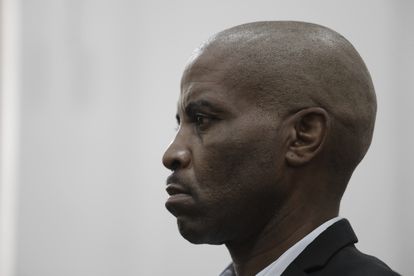 [FILE] Zandile Christmas Mafe, a suspect in connection to a fire at the South African Parliament, appears at the Magistrate Court in Cape Town on January 11, 2022. – He is suspected of starting a devastating fire that gutted South Africa’s parliament.
A blaze broke out in the Cape Town complex before dawn on January 2, 2022 spreading to the National Assembly, the roof of which collapsed. (Photo by GIANLUIGI GUERCIA / AFP)

[FILE] Zandile Christmas Mafe, a suspect in connection to a fire at the South African Parliament, appears at the Magistrate Court in Cape Town on January 11, 2022. – He is suspected of starting a devastating fire that gutted South Africa’s parliament.
A blaze broke out in the Cape Town complex before dawn on January 2, 2022 spreading to the National Assembly, the roof of which collapsed. (Photo by GIANLUIGI GUERCIA / AFP)

Zandile Mafe’s first pre-trial conference in the Cape Town High Court took place in his absence on Friday, 12 August, despite the fact that he was in the building. Both the State and defence indicated they are nearly ready for trial. However, the question about whether the accused is mentally fit to stand trial was raised again.

MAFE ON ANOTHER HUNGER STRIKE

Mafe is accused of arson, housebreaking with the intent to commit arson, terrorism and theft. The State alleges he set Parliament alight and destroyed the Old and New Assembly buildings between 1 and 2 January.

When his case was called, the court orderly emerged alone and said they were facing a predicament – the accused was lying on the floor of the holding cell and refusing to enter the courtroom.

The Presiding Officer, Judge Elize Steyn, asked that the matter stand down and requested Mafe’s lawyer, Luvuyo Godla, go downstairs to speak with him.

READ: ‘He is lying down’: Zandile Mafe case postponed in bizarre circumstances

In the meantime, all the other cases on the roll were heard and the court was adjourned. Godla returned and addressed the court.

He said he did not anticipate that Mafe would not be able to come into court. Judge Steyn asked if the accused was unwell and Godla said Mafe has been on a hunger strike “for a considerable amount of time.”

“Unfortunately, I did not get any information from Pollsmoor, they usually advise me as and when Mr Mafe embarks on a hunger strike…

“To make it even worse he came out of prison knowing that he is not going to come into the courtroom as he is still in his pyjamas,” said the lawyer.

After proceedings were wrapped up, Godla told reporters that Mafe has been on a hunger strike for approximately six weeks.

TRIAL DATE COULD BE SET AT NEXT COURT APPEARANCE

Both Senior State Advocate, Mervyn Menigo and Godla that pre-trial proceedings could continue in Mafe’s absence.

Judge Steyn cut to the chase and told both parties that she does not want to go into the merits of the case. “I just want to make sure that the matter will be prepared for trial as quickly as possible.”

Menigo said the State has handed about 95% of its evidence to the defence. All that is still outstanding is “a voluminous” crime scene investigation report that will be provided electronically and video evidence.

The prosecutor said he asked the defence to provide an external hard drive as the footage takes up a lot of space.

“Once [the hard drive] is provided by the defence, they should have received all the particulars and be ready to consult and be ready for trial.

Judge Steyn asked Godla if Mafe still intends to plead not guilty and he replied that his instruction from his client has not changed.

She also asked the State to confirm the issues to be considered at the trial, including, a trial within a trial regarding the alleged confessions and a pointing out made by Mafe; video and cellphone evidence and facial compounds. Menigo confirmed the issues and said multiple experts will called to testify in court.

“This pre-trial for Mafe, the accused in this matter, will be postponed to the 2nd of September in order for the representatives to attend to further procedural aspects in this matter,” said Judge Steyn.

National Prosecuting Authority (NPA) spokesperson Eric Ntabazalila said the State hopes the parties will be able to set a trial date at the next court appearance.

On the steps outside the High Court, Godla spoke to reporters about the issue of Mafe’s mental health and another Section 78 application being touted by the State.

As far as the defence is concerned, the issue was nullified when Judge President John Hlophe set aside the order that sent Mafe to Valkenberg for psychiatric assessment.

“There’s nothing we will do about it – remember that matter was dealt with by this honourable court and it was a full bench. So bringing up the matter now is just circumventing the order made and bringing it through the back door,” said Godla.

The State, however, feels that the issue was left hanging and said the defence only challenged the procedural aspects of the mental health referral and the questions around the accused’s mental state remain unanswered.

Ntabazalila said the State planned to have Dr Zelda van Tonder – the doctor who preliminarily diagnosed the accused with paranoid schizophrenia – in court on Friday but decided against it after talking to Judge Steyn.

During proceedings, Steyn said the Section 78 application should be heard by the trial judge and advised Menigo and Godla to approach Judge President Hlophe to find out who he is considering appointing to the trial.

The lawyer also revealed that Zandile Mafe is taking his bail appeal to the Supreme Court of Appeal. Mafe was first denied bail by the Cape Town Magistrate’s Court on 4 February. His bail appeal in the Cape Town High Court was dismissed on 30 May after a split judgement.

The accused’s defence told the media they will appeal all the way to the Constitutional Court, if need be, after his first bail application was dismissed.

“[The bail appeal] is still before the Supreme Court of Appeal, we are waiting. We have been furnished with case numbers. At any time we might go,” said Godla.