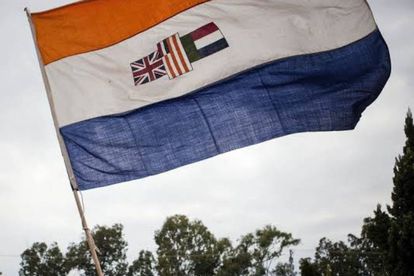 The Du Toit family are back in the spotlight after an image of Pierre du Toit brandishing the apartheid flag emerged. Photo: @ali_naka / Twitter

The Du Toit family are back in the spotlight after an image of Pierre du Toit brandishing the apartheid flag emerged. Photo: @ali_naka / Twitter

Theuns du Toit, the Stellenbosch University student who urinated on another student’s belongings, is back in the spotlight. An image of Du Toit’s brother Pierre brandishing the Apartheid flag has emerged and caused concern.

Du Toits have not responded to the picture

Pierre, along with three others, can be seen smiling as they hold the banned old SA flag. IOL reported that the picture was taken in December 2021. The publication stated that the image has been a cause of concern for many.

Especially after Rudi du Toit, their father, called for a meeting with Babalo Ndwayana’s family following the urination incident. Theuns was caught on camera urinating on Ndwayana’s belongings in the Huis Marais residence in May.

Since the incident, Theuns was suspended from Stellenbosch University.

Pierre was given the opportunity by IOL to respond to the emergence of the image of him with the old flag. The publication said that both Pierre and his father Rudi declined to comment.

The old flag has been banned in private and public spaces

Just three years ago, the Equality Court in SA ruled that the display of the old flag was a form of hate speech. It said that it could not be displayed in private and public spaces but could be displayed for artistic, academic or journalistic expression in the public interest.

AfriForum recently approached the Supreme Court of Appeal in Bloemfontein to oppose the banning of the display of the old flag. The civil rights organisation said it challenged the ruling although it does not display the old flag. Judgement in the matter has been reserved.

“The banning of the flag set a dangerous precedent that anything causing offence can and should be banned, even if there is no call for violence or to cause imminent harm,”

It was previously reported that in a 16-second clip, Du Toit gave a very brief statement, saying: ‘I just want to apologise in general for my behaviour, I know what I did was wrong, and I’m sorry’.

This didn’t stretch far enough for some critics, however. One social media user also shared the clip, claiming the Stellenbosch student showed ‘zero remorse’. Others, meanwhile, believe the apology was only given because he was caught on camera. Read the full story here.