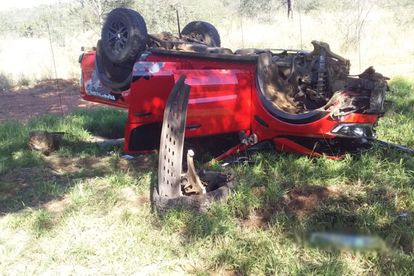 A man was critically injured when his vehicle rolled over.
Photo: ER24

A man was critically injured when his vehicle rolled over.
Photo: ER24

A 57-year-old man suffered critical injuries in a single-vehicle rollover on the R526, 12 km from Gravelotte, East of Tzaneen, in Limpopo on Saturday.

When paramedics arrived, the man was still lying inside the vehicle.

According to ER24, a spine board was used to immobilise and extract him from the vehicle.

“Advanced Life Support interventions were required to stabilise his condition before being transported to Mediclinic Tzaneen for further care.

“The Fire Department as well as the South African Police Services were on the scene for further investigations.”

DRIVER HOSPITALISED AFTER TRUCK CRASHES INTO A RIVER

A man was left critically injured after his truck rolled crashing into a river off the N11 towards Hendrina, outside of Ermelo in Mpumalanga.

The driver who is believed to be around 40-years-old was found lying in the shallow water on Sunday morning.

According to ER24, paramedics and the Provincial emergency services reportedly arrived at 10:20 to find the wrecked truck and trailer on the side of the road in a small river.

The body of the driver, a man in his 40s, was found lying in the shallow water.

“Medics assessed the man and found that he was in a critical condition, having sustained numerous injuries.

“The man was treated and provided with advanced life support before being transported to Ermelo Provincial Hospital for urgent care.”

This incident’s details are unknown, but local authorities were on the scene for further investigations.