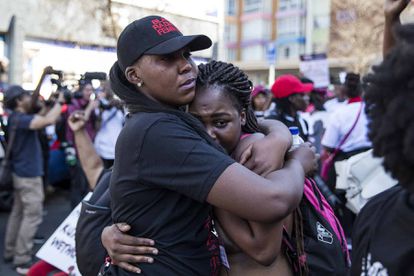 A woman is comforted by another woman during a march gathering women in Pretoria who are demanding sustainable action against gender-based violence through a #TOTALSHUTDOWN march from downtown to the Union Buildings to hand over a memorandum on August 1, 2018. (Photo by WIKUS DE WET / AFP)

A woman is comforted by another woman during a march gathering women in Pretoria who are demanding sustainable action against gender-based violence through a #TOTALSHUTDOWN march from downtown to the Union Buildings to hand over a memorandum on August 1, 2018. (Photo by WIKUS DE WET / AFP)

Many gender-based violence shelters need funding. This was the finding of the report released by the Commission for Gender Equality on Monday, 24 June.

The Commissioner for the Commission for Gender Equality, Nthabiseng Moleko, spoke about this report in an eNCA interview.

“All shelters in SA are really crying out for funding – particularly those funded by the department.”

Moleko added that the shelters funded by the government often did not receive their funds on time.

Some shelters were highly equipped and had enough staff while others were located in a converted shipping container.

“Some were paid late putting pressure on the work required. Minimum standards for infrastructure for all shelters were not the same.”

The report also looked at shelters across the country. Moleko stated that the Department of Social Development seemed to not have a systemic model for funding shelters.

Moleko stressed that the department needed to look at the unique needs of the shelters in different provinces.

Moleko added that the poorly funded shelters have become a crucial issue because of the high incidents of gender-based violence.

“We have five times higher global average of femicide, highest incident of rape in the world – glaringly high number of protection orders per annum.”

Moleko said that the biggest problem uncovered by the report was that one of the shelters would not admit male children above a certain age.

“Imagine that you are running from a perpetrator that is trying to kill you. There should be no discrimination in shelters.”

“I think from a policy perspective we are saying we need a clear gender budgeting framework or indicators. We need budget allocations specifically targeted to deal with the problem of gender-based violence. Not only with shelters but also with the policing and the justice clusters.”

“They often stay with their abusers because they have no other option due to financial reliance.”

Moleko recommended that there needs to be a focus on skills development for the victims of gender-based violence.

She added that shelters need to look at partnering with training service providers and government-funded education institutions.