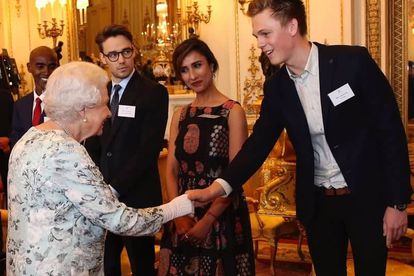 23-year-old Caspar Lee is a South African YouTube sensation, with over 7 million subscribers on YouTube, Caspar is flying the South African flag high. A few weeks ago on Instagram, he revealed his invitation to meet the Queen of England, now he has shared the exact moment he met her.

How did young Caspar do it? He posted the photo on Twitter with the caption “Yaaaaas my Queen. #queensyoungleaders”. The South African stood side by side with his fellow Young Leaders supporters, some even more famous than him. With the presence of British athlete Mo Farah and One Direction singer Liam Payne, Mr Lee stood in great company.

Look who bumped into each other in the Blue Drawing Room in Buckingham Palace @Mo_Farah @LiamPayne and @Caspar_Lee #QueensYoungLeaders pic.twitter.com/1652FoIp9i

Being invited to support the Queen’s young leaders award seems to be a full circle moment for Caspar. Last week he took a cheeky pop at a former teacher who didn’t have much faith in his YouTube videos.

Shoutout to the teacher who said I shouldn't waste my time making YouTube videos. pic.twitter.com/dK80nbyJiR

Caspar makes weekly videos from London where he has lived for the last few years. He is still proudly South African and as Knysna boy, he donated and created a fund for his global fans to also donate towards the #KnysnaFires crisis.

The awards ceremony was also attended by Prince Harry, who thanked the recipients for their inspiration.

“The Queen’s Young Leaders award recognises what these incredible young people have achieved – not for themselves, but for others – for their peers, for their communities, for their environment, and for those less fortunate.”

While Caspar did not receive an award, South Africa was well represented with 3 women (Farai Mubaiwa, Aditi Lachman and Chantelle de Abreu) being acknowledged for their incredible work.

The only negative of this whole event? Caspar seemed to be the only attendee not wearing a tie! Seriously though Caspar, thanks for making all of us back home, very very proud!

The moment I realised that I forgot my tie at home. @QueensLeaders @LiamPayne pic.twitter.com/hM9YdovQw2