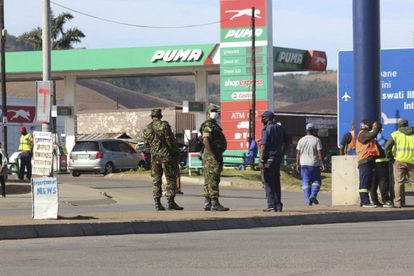 Demonstrations escalated radically in Eswatini this week as protesters took to the streets demanding immediate political reforms.
Activists say eight people were killed and dozens injured in clashes with police.
Internet access has been limited while shops and banks are shuttered, straining communication and limiting access to basic goods under a dawn-to-dusk curfew. (Photo by – / AFP)

Demonstrations escalated radically in Eswatini this week as protesters took to the streets demanding immediate political reforms.
Activists say eight people were killed and dozens injured in clashes with police.
Internet access has been limited while shops and banks are shuttered, straining communication and limiting access to basic goods under a dawn-to-dusk curfew. (Photo by – / AFP)

Two journalists from South African non-profit and social justice publication, New Frame, were allegedly detained, assaulted and tortured by security forces in eSwatini. The publication said soldiers accosted Magnificent Mndebele and Cebelihle Mbuyisa multiple times during their time in the country before they were eventually assaulted on Sunday, 4 July.

In a statement, New Frame detailed the alleged abuse Mndebele and Mbuyisa suffered in eSwatini. The pair of journalists were covering the pro-democracy protests on the ground and focused on the alleged killings of citizens by the state.

On Sunday, just after 9:00, Mndebele and Mbuyisa were stopped on the MR3 highway near Matsapha after attending the funeral of Vincent Vusumuzi Bhembe, 65, from Ngculwini in the Manzi region. He was allegedly shot and killed by security forces on 30 June and succumbed to his injuries in hospital the next day.

Bhembe is one of many citizens who have allegedly been killed by the state, according to Mndebele and Mbuyisa’s report – eSwatini killings: All the king’s men vs the people. An eyewitness at the scene told the journalists that the security forces opened fire with little warning and sped off immediately.

“New Frame’s journalists were threatened at gunpoint, their cameras were seized and they were forced to delete important footage an photographs from the funeral, including interviews with people who had been shot and injured,” said the publication.

The security forces took Mndebele and Mbuyisa to Sigodweni Police Station and interrogated them, according to New Frame. The journalists were alleged punched, kicked and had plastic bags placed over their heads to suffocate them.

“This act, sometimes described as ‘tubing’, is globally recognised as a form of torture,” said the publication, adding that the practice was used by the apartheid regime.

New Frame’s legal representatives asked an eSwatini-based lawyer to locate the journalists and secure their urgent release once it became aware of the detention. The eSwatini lawyer successfully intervened and Mndebele and Mbuyisa were released at approximately 15:00 on Sunday and were taken to hospital for medical treatment.

The journalists, however, were warned that it would be too risky to head for the border immediately as police, soldiers and correctional officers had set up blockades on the country’s main highways.

Mndebele and Mbuyisa were given shelter and cared for “by an ordinary citizen who works as a cleaner” on Sunday night in Mbabane. They crossed the South African border at 15:30 on Monday, 5 June and are now safe.

New Frame praised Mndebele and Mbuyisa for their courage and integrity, saying that the pair acted in the best traditions of journalism. Mbuyisa reportedly received an intimidating message, before the detention, on Thursday, 1 July, via WhatsApp that warned “not to make any movement.” The warning was from an individual known to be close to the eSwatini royal family, according to the publication

“The attempts to silence journalists and activists are aimed, among other things, at trying to prevent the scale of the suffering of the people of eSwatini being conveyed to people outside the country,” said New Frame.

“New Frame condemns  the detention, assault and torture of Mndebele and Mbuyisa in the strongest terms and calls for international solidarity with all journalists and activists facing repression in eSwatini, and for the immediate restoration of democratic freedoms in that country.”