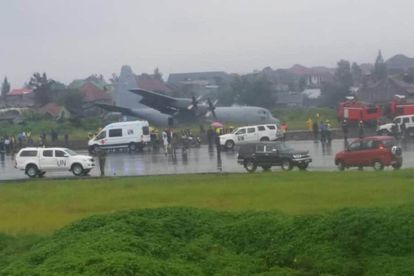 SANDF spokesperson Siphiwe Dlamini said the plane had been deployed in the DRC as part of a United Nations’ peacekeeping mission. No-one was injured during the incident and circumstances surrounding the crash were being investigated, said Dlamini. Videos of the aftermath have since been shared online.

Here’s what we know so far:

The aircraft was returning from the eastern Congo city of Beni, where it was providing logistical support to the South African contingent deployed in the region. However, South Africa’s Defence Web have confirmed that the damage to the affected wing is likely to be expensive – and costly to fix.

African Defence Review Director Darren Olivier has conceded that it would be “difficult” to repair these damages based on SAAF’s small budget. The bill to salvage this aircraft would likely cost tens of millions of rand. Thankfully, there have at least been no human costs to report.