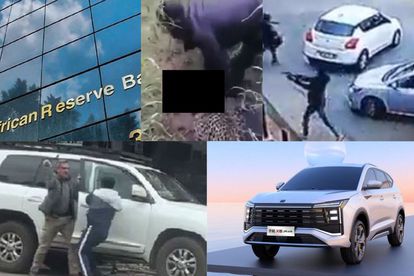 We’ve got the latest news stories and headlines in South Africa on Friday, 22 July.

Lesetja Kganyago, governor of the SA Reserve Bank, on Thursday, hiked the repo rate by another 75 basis points.

It’s enough to make you sick to your stomach: A man thought to be employed by Kruger Park has been caught violently assaulting a leopard.

In other news, the terrifying moment when a gang of 15 armed robbers stormed the Lakeside Mall in Benoni on Wednesday was caught on camera.

Outnumbered, but not outwitted, this civilian became an instant hero – but the Klerksdorp resident will not be filing a criminal complaint.

China’s latest SUV has become the butt of a joke in South Africa and we doubt that it will ever be taken seriously while it is called Sehol.

Lesetja Kganyago, governor of the SA Reserve Bank, on Thursday, hiked the repo rate by another 75 basis points.

FOR THE LATEST BUSINESS NEWS VISIT THE SOUTH AFRICAN WEBSITE

Three (of the five) members of the monetary policy committee supported the increase, while one wanted 100 basis points and another preferred a 50 basis point hike.

The increase represented the biggest hike since September 2002 when the repo rate was hiked by 100 basis points.

It doesn’t get any dumber or more disrespectful than this. A man thought to be part of Kruger Park’s staff was caught slapping a leopard on camera this week, shortly after it had been euthanised.

It came in the wake of an attack on a serving ranger. The victim suffered deep lacerations, but his injuries weren’t life-threatening. However, a decision was taken by KNP officials to put the leopard down, citing the animal as a clear and present danger.

On 17 July, the leopard was captured and subsequently eliminated by teams working in Kruger Park. It’s understood that another attack was reported just weeks ago, and the behaviour exhibited by the creature is extremely unusual.

The terrifying moment when a gang of 15 armed robbers stormed the Lakeside Mall in Benoni on Wednesday was caught on camera.

The robbery took place around midday on Wednesday.

In the first video shared on social media several men are seen running in the mall while gunshots can be heard. The voice of a terrified woman is heard as she witnesses the robbery and shooting unfold in front of her eyes.

A middle-aged man who fought off FIVE attempted robbery suspects will not press charges against the group that targeted him – leaving police in Klerksdorp powerless to prosecute as it stands.

A viral video captured the moment an unassuming citizen was forced to fight for his life after the quintet of crooks advanced toward his white SUV. The man withdrew a knife from his pocket and lunged toward the criminals who were trying to intimidate him.

Did you have to do a double-take when you first read the name of China’s latest SUV – the Sehol X8 Plus? The name has South Africans in stitches.

Why is it so funny?