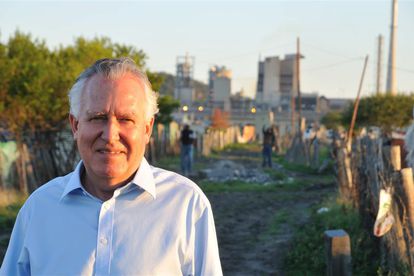 Nelson Mandela passed away over a year ago and South African democracy is now almost 21 years old. How far do you feel South Africa has come as a nation and of what can it justifiably be proud?

I think South Africa has made amazing strides compared with the dark abyss into which it was collapsing towards the end of apartheid. At the time of Nelson Mandela’s release, the country was at risk of civil war and the economy was in tatters. Over the last two decades millions of homes have been built, millions of citizens have gained access to electricity, running water and sanitation, and school attendance has improved. Overall there has been a significant rise in real living standards.

It is only 21 years since the country was rescued from horror though; one cannot expect change and transformation to be wholly completed in so short a time.

In light of the Marikana massacre, continued labour unrest, and accusations of nepotism and corruption levelled at the country’s leadership, do you feel that South Africa will be able to achieve social justice and fulfil its potential as a country – the potential that Madiba and others dreamed of?

Despite the fantastic progress that the country has made, there are huge problems facing the government. Corruption is like a cancer and needs addressing all the way from municipal level right to the very top. Whilst there are undoubtedly many excellent public servants, sadly in some cases the main motivation to seek office seems to be the opportunity to stick the hand in the public till. Many within the ANC are determined to get on top of this, but equally there are those who are benefiting from corrupt practices and will resist giving them up, in the same way that a number of wealthy, white South Africans under apartheid did not want to give up their privileges.

Service delivery is also extremely variable. If one considers the huge amount South Africa spends on education as a proportion of GDP, the fact that the country is ranked so low down out of 130 countries is unacceptable. Funding is not the issue. The quality of teaching is at best inconsistent, with a shocking lack of professionalism in many cases. The teaching union (SADTU) has fought against initiatives to drive up standards. As a Trade Unionist myself I must say that the job of a union is not to defend bad practice.

Urgent reforms are also required within the police force. Marikana was an appalling disgrace. A couple of decades on from apartheid, we really should have seen professional, riot-control techniques, not this militarised approach which resulted in tragic, needless deaths.

It is sad that there are still these significant shortcomings to address, especially following the wonderful World Cup in 2010, when the world got to see such a great display from the Rainbow Nation. There is a lot going for South Africa: a strong economy, good infrastructure, a well run financial system, good corporate governance, an independent judiciary, and a world class, robust constitution. For South Africa to fulfil its potential though, it needs to build on these strengths and combat the issues I’ve mentioned.

With the emergence of Julius Malema’s Economic Freedom Fighters and reports of NUMSA forming a new political party following the formation of The United Front, how do you feel the political landscape is changing?

The emergence of the EFF and the United Front could be a healthy kick up the backside for the ANC (whom I support, by the way). The ANC has allowed itself to become complacent and I think this is why corruption has taken hold within some quarters of the party. The ANC needs to keep an eye on the United Front, as many of its supporters are very credible, ex-struggle heroes who have roots in the ANC.

Rival unions like AMCU have also shifted the landscape somewhat. Leaders of mainstream unions (like NUM in the run-up to Marikana), were remote and not in touch with the feelings of discontent experienced by their members. That said, some of these rival unions only offer confrontation; I don’t know of a trade union in the world that can succeed and has survived long term when confrontation is its modus operandi. Sometimes a strike is the only option, but I get the impression that certain leftist, militant unions start out by looking for a fight. This is not sustainable in the long run as such an approach is not in the interest of their members.

Expats are often accused of harbouring negative views towards their homeland; what role do you feel expats could play with regards to the development of South Africa?

Expats enjoyed huge levels of investment during their education in South Africa. I hear a lot of negativity though – often factually inaccurate. I sometimes wonder whether these expats were genuinely supportive of the changeover to democracy. Sometimes one comes across a determination to denigrate everything in the new South Africa, whilst not conceding that terrible things happened under apartheid – including horrendous levels of corruption. Many expats have a privileged life as a result of apartheid or apartheid’s legacy. As a matter of duty, expats should support and promote the country.

You are stepping down as MP for Neath in May. What plans do you have for life after front-line politics?

I had intended to stand again having been re-selected by my local party back in November 2013. Ed Miliband suggested to me, however, that I might make a bigger contribution to the party and assist him if I played another national, political role. For a variety of reasons I cannot yet say what that role is, but it will become clear around May.

We look forward to finding out more in a few months time. Thank you, Mr Hain.