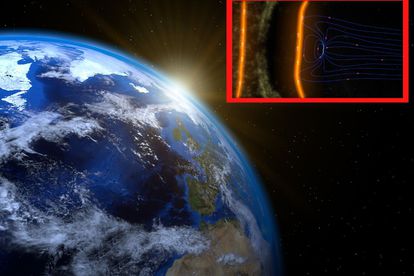 Earth is under a solar storm warning for TODAY due to the chance of a minor G1-class geomagnetic storm hitting our planet.

WHAT DO YOU NEED TO KNOW ABOUT THE SOLAR STORM?

High-speed solar winds from a “hole” in the sun’s atmosphere are set to hit Earth’s magnetic field on Wednesday. This will trigger a minor G-1 geomagnetic storm.

Although it might be a minor storm, scientists warned that it might have a slight impact on Earth’s geomagnetic field and cause radio and GPS signal disruptions.

The National Oceanic and Atmospheric Administration (NOAA) classifies geometric storms in five stages – one being the weakest and five the strongest.

WHAT IMPACT WILL IT HAVE ON EARTH?

And the one set for Wednesday will have a very low impact on satellites and technologies on Earth.

However, it may confuse migratory animals that use Earth’s magnetic field as a navigational tool.

ALSO READ: It is time for the SUPERMOON – go outside and have a LOOK!

WHAT IS A GEOMAGNETIC STORM?