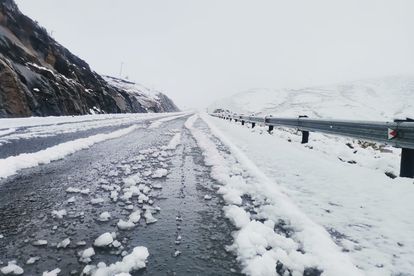 Roads in parts of the Eastern Cape are covered in snow. Image via Twitter/@TrafficSA.

Roads in parts of the Eastern Cape are covered in snow. Image via Twitter/@TrafficSA.

The Department of Transport in the Eastern Cape has urged motorists to drive cautiously as roads in parts of the province are covered in snow.

The R58 route between Elliot and Barkly East was closed on Tuesday morning due to snowfall. However, the Barkley Pass is still open.

ROADS CLOSED DUE TO SNOW IN EC

The South African Weather Service (SAWS) had forecast persistent rain for the eastern part of the Eastern Cape, KwaZulu-Natal and Mpumalanga this week.

The weather service also issued an orange level 5 snow warning for the Eastern Cape for both Monday 19 September and Tuesday, 20 September.

SAWS said a steepening upper-air trough will make landfall and is coupled with a ridging high pressure system, resulting in a significant decrease in daytime temperatures and good chances of showers and thundershowers across the province.

SAWS said during the coming days, this system will further deepen and intensify, forming a cut-off low over the southern and central interior.

Furthermore, the weather service said whilst much of the interior of the African subcontinent is currently rather dry, this system is expected to introduce a welcome rainy spell to some of the eastern provinces from Sunday onwards, through to the middle of this coming week. However, this system is expected to shift progressively eastwards, resulting in mostly clear, rain-free conditions by Thursday.