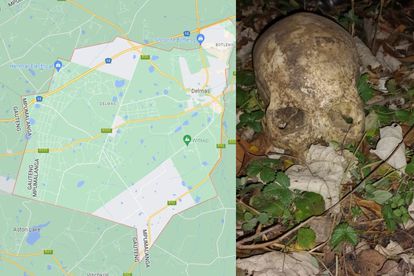 Skull with two bullet holes found on a farm near Delmas Photos: GoogleMap/SAPS

Skull with two bullet holes found on a farm near Delmas Photos: GoogleMap/SAPS

Human remains, including a skull with two bullet holes, were found on a farm near Delmas on Thursday.

THE SKULL AND OTHER REMAINS WERE FOUND ON THURSDAY

Police said two cable ties were attached to the bones, which shows that the person could have been tied as well.

According to police spokesperson Brigadier Selvy Mohlala, the human remains were found on Thursday evening at around 18:00.

“Police were informed about the discovery made by a person who was collecting wood in the field at Hekpoort farm.

“On arrival, the SAPS members from Delmas confirmed that the bones were for a human being and on further investigation, they noticed two small holes in the skull, which suggests the possibility of a person having been shot.”

A BLACK JACKET AND BLACK TROUSERS WERE ALSO FOUND

He furthermore said police also discovered that there were two cable ties attached to the bones, which show that the person could have been tied as well.

ALSO READ: Have you seen the convoy of 60 SANDF armoured vehicles on the N1?

“Other items found with the bones include a black jacket as well as black trousers; however, the clothes were torn. The gender of the person in this regard has not yet been determined.

“Police cannot rule out the possibility of the charge being changed to murder pending further investigations.”

Police at Delmas are investigating an inquest case.

DO YOU HAVE A MISSING FAMILY MEMBER OR LOVED ONE?

The police are urging anyone with information regarding the discovery or anyone who might have been looking for a loved one probably wearing the similar clothes as described to immediately contact the police at Delmas or call the Crime Stop number at 08600 10111. Alternatively, members of the public can send information via MYSAPSAPP. All received information will be treated as confidential, and callers may opt to remain anonymous.

POLICE TO INVESTIGATE WHAT LED TO THE DEATH OF THE PERSON

The Provincial Commissioner of the SAPS in Mpumalanga, Lieutenant General Semakaleng Daphney Manamela, has indicated that this matter will be investigated with the hope of uncovering what has led to the death of this human being.

“We are looking forward to getting the answers through the investigation that has already commenced.”