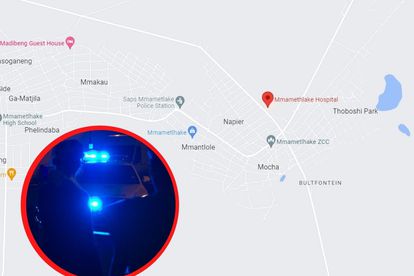 Six men were killed in a HORROR accident in the Mametlhake area. A bus collided with the rear of the tractor. A sedan travelling in the opposite direction crashed into the wreckage of the two vehicles that were already involved.

SIX MEN WERE KILLED IN THE HORROR ACCIDENT ON FRIDAY EVENING

According to the Mpumalanga Department of Community Safety, Security spokesperson Moeti Mmusi the accident happened on the D2740 road in Mametlhake on Friday evening.

“This resulted in six people, who were all occupants in the sedan, being killed instantly.

“Meanwhile, the drivers of the bus and the tractor sustained serious injuries, and they were rushed to the nearby Mametlhake Hospital.”

THE CAUSE OF THE ACCIDENT IS THE SUBJECT OF AN INVESTIGATION

He said initially, it was reported that five people lost their lives, but as the emergency personnel was working on the scene, they discovered the sixth body.

“The cause of the collision is the subject of the investigation by the police, Road Traffic Management Corporation (RTMC) and the Safety Engineering team from DCSSL.”

Mpumalanga MEC for Community Safety, Security Vusi Shongwe, is sending condolences to the bereaved families of the six men who were killed. He furthermore also wished those who were injured a speedy recovery.

CALL FOR CAUTIOUS DRIVING TO AVOID THESE DEADLY CRASHES

Shongwe once more reiterated a call for cautious driving to avoid these deadly crashes.

“We are once again calling upon motorists to be extremely cautious, especially at night when visibility is reduced.”