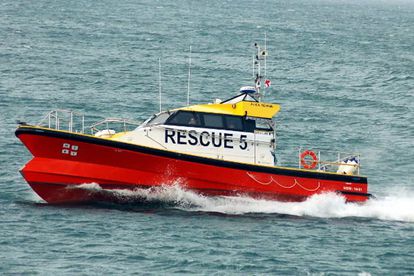 The National Sea Rescue Institute (NSRI) said on Friday that a Police Dive Unit, supported by Police Sea Borderline Control, is continuing in the search for six missing fishermen.

This comes after a boat carrying 13 people capsized around 08:00 on Thursday morning near Mouille Point.

NSRI Melkbosstrand and Yzerfontein have been tasked to keep a lookout and will assist police in their search efforts. Law enforcement officers patrolling the coastline have also been asked to stay vigilant.

Boat capsizes with 13 fishermen on board

NSRI Bakoven duty crew were activated on Thursday morning following reports of a boat that had capsized with 13 people on board. One man came ashore at Clifton and raised the alarm.

The NSRI Bakoven sea rescue craft Rotarian Schipper was launched and emergency services responded. No sign of a capsized boat could be found, however, upon investigation with the survivor at Clifton, it was determined that a RHIB (Rigid Hull Inflatable Boat) became water-logged during the early hours of the morning between Clifton and Oudekraal. It was suspected that all the fishermen went overboard.

An unmanned semi-submerged RHIB was located two miles off-shore of Mouille Point Lighthouse and is believed to be the craft that the 13 men had been on.

The following groups joined the search party between Mouille Point and Oudekraal:

The boat was towed to the Police Sea Borderline Control station at Table Bay Port.

The man who raised the alarm at Clifton was not injured and revealed that an additional three fishermen had come ashore and were not injured. They were accounted for.

During an extensive search, two more were located by the Air Force helicopter floating in the water off-shore of Bakoven.

Both fishermen, suffering hypothermia, were lifted into the helicopter using a basket hoist and they were airlifted to hospital where they are recovering.

During the ongoing search, the body of one man was located. Police have opened an inquest docket.

This means that out of 13 fishermen, six were unharmed, one was found dead and the other six are still missing.

The NSRI pass their condolences to the family of the deceased man and thoughts are with the families of the remaining six missing men.