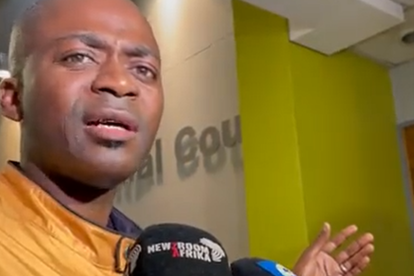 Slain Bafana Bafana goalkeeper, Senzo Meyiwa’s brother, Sifiso says if he was in court he would not be able to stomach the “performance” by the late soccer star’s friend Tumelo Madlala at the Gauteng High Court, Pretoria.

Sifiso who was often present in court before was nowhere to be seen in the two weeks the proceedings in September which saw the cross-examination and re-examination of first and second state witnesses (Sergeant Thabo Mosia and Patrick Mthethwa) wrapped up. Third witness Tumelo Madlala then took to the witness stand.

The late soccer star was shot at his then-girlfriend and singer Kelly Khumalo’s home in Vosloorus on 26 October 2014 in an alleged robbery.

Five men are currently on trial for the murder of Senzo Meyiwa. Muzikawukhulelwa Sibiya, Bongani Ntanzi, Mthobisi Prince Mncube, Mthokoziseni Maphisa and Fisokuhle Ntuli. They all pleaded not guilty.

Proceedings had to be halted and court adjourned early on Tumelo’s first day in the witness box as he was teary and was overcome by emotions.

On 15 September the late goalkeeper’s friend pointed out accused 2, Bongani Ntanzi as one of the intruders whom Meyiwa had pinned against the wall at Kelly’s home before the shot that claimed his life went off. He also indirectly identified accused 3, Mthobisi Mncube as the first intruder who walked in carrying a firearm and had dreadlocks at the time. However Sifiso says he has shown Tumelo pictures of accused 3 and he claimed he had never seen the man before.

Speaking to Drum, Sifiso said he wonders if Tumelo who claimed to have loved Senzo and also sang his praises really did or it was because he was fascinated by being around the former Bafana Bafana captain.

Weighing in on Tumelo’s testimony Sifiso said the Tumelo he knows is very different from the one who was answering questions during his cross-examination in court.

“I see he is still sticking to his story but with new information and incidents that he neglected to tell us as Senzo’s family,” Sifiso said.

ALSO READ: ‘We thought they would talk’: Meyiwa family on Senzo’s friends

Sifiso said the incident that Kelly switched off the lights and the call she allegedly made to get police to go away at the Mulbarton house where all the people who were present when Meyiwa was shot spent the night at makes him wonder what else happened that night that only these people who were there know.

“We have lots of questions and the fact that they have other people as suspects and not the people who were at the house is another reason I excused myself from this circus,” he said.

“THERE’S MORE THAN WHAT MEETS THE EYE “

Sifiso said from a distance he can tell that there is more to this case than what meets the eye.

The late soccer star’s brother said it is absurd to him that Tumelo’s face is not shown in court whereas he is already known and has made money out of the same case.

During his testimony, Tumelo revealed that he was paid by Netflix to appear on the docuseries Senzo: Murder of a Soccer Star and also told the court that he sold Senzo’s pictures that he had taken with his personal camera.

“We were in the process of getting bail for the accused and now that he is identified as the person who killed my brother, the bail application won’t be considered. That means someone told him who to point out because they know this information,” he said.

Just as the rest of the Meyiwa family, Sifuso is still hopeful that the truth will prevail maybe as the trial continues.

“I can tell you that the current accused have nothing to do with this, and I hope the law is fair and justice will prevail,” he said.