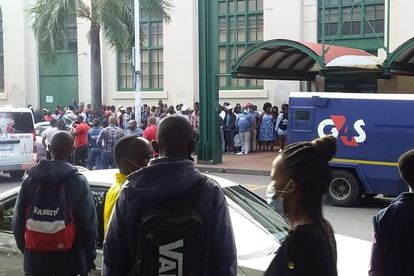 A Durban policeman has been shot during an attempted cash-in-transit heist in the central business district.

SAPS spokesperson Brenda Muridili said that the shooting incident had occurred at around 3.30pm at The Workshop shopping centre in Dr A.B Xuma Street.

“A security guard was coming from the business premises to collect cash when he was shot at by unknown number of suspects,” Muridili said.

“Police officers that were in the vicinity conducting an investigation witnessed the incident. The police officer managed to grab a suspect that was carrying the money box and the box fell to the ground. The suspects opened fire at the police officers and a police constable stationed at Durban Central was shot on the abdomen,” she said.

“A security guard was also shot in the abdomen. Both victims were rushed to hospital for medical attention. The money box was recovered at the scene. The suspects left empty handed in their getaway vehicle. Charges of attempted cash-in-transit robbery and attempted murder have been registered at SAPS Durban Central,” Muridili said.

According to a statement issued by Rescue Care Paramedics on social media, paramedics had responded to a call for assistance at the shopping centre.

“On arrival on scene a male police officer was found to have suffered a gunshot wound to his chest and was in a serious condition.  Advanced Life Support Emergency Care Practitioners worked to stabilise the man whilst he was rushed to a nearby hospital for further immediate definitive care,” Rescue Care said.

Reports from the scene indicated that the police officer had been shot at by a number of armed suspects during an attempted cash in transit robbery, Rescue Care said.