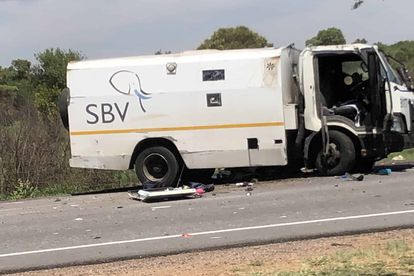 A photograph of a ruined SBV cash van from an unrelated CIT heist. Photo: @bonganig / TW

A photograph of a ruined SBV cash van from an unrelated CIT heist. Photo: @bonganig / TW

Five robbers, that included former SBV employees, were sentenced to 30 years of imprisonment by the Pretoria High Court for a cash-in-transit heist that occurred in January 2020.

The sentence came after Judge Bert Bam sent convicted them of robbery with aggravating circumstances, causing an explosion, conspiracy to commit an offence, possession of an unlawful firearm and possession of unlawful ammunition.

Bekithemba Patrick Mbanjwa, one of the alleged robbers, was out on bail and did not appear in court on the day of judgement. A warrant of arrest has been issued for him.

David Tolo, a driver involved with the accused, was granted indemnity from prosecution after he turned State witness.

It was revealed that the head of department of SBV logistics at Watloo Cash Centre – Henrico Fourie – recruited and conspired with two other SBV employees – Ntlatleng and Tolo – to rob SBV truck no. B157 along the N4 highway near Bronkhorspruit as the cash van made its way to Pretoria.

A Mercedes-Benz vehicle was used to ram the SBV van off the road on 7 January. When the van stopped, the accused fired shots and Tolo and Ntlatleng were told to exit the vehicle.

Explosives were used and the accused took more than R25 million from the safe and shared it with each other.

“In court, all robbers pleaded not guilty to the charges preferred against them,” said Mahanjana.

State prosecutor Advocate Molahlwa Mashuga asked the judge to impose a severe sentence that would “send a strong message” as cash-in-transit robberies are quite prevalent in South Africa. He also stressed that three of the accused were employed by SBV and it was an inside job that was planned.