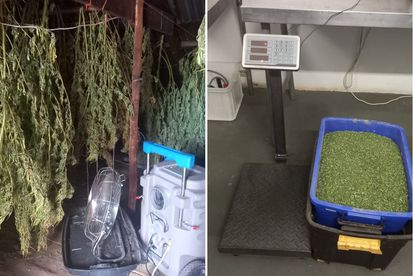 The SAPS in the Western Cape have arrested 25 after raiding a cannabis cultivating farm. Photo: SAPS / Facebook

The SAPS in the Western Cape have arrested 25 after raiding a cannabis cultivating farm. Photo: SAPS / Facebook

The South African Police Services (SAPS) in the Western Cape raided a cannabis cultivating farm. The farm, in the Drakenstein rural area of Paarl, was raided after information was followed by members of the Flying Squad.

25 suspects arrested and a substantial amount of cannabis seized

The SAPS conducted searches at the farm and arrested 25 suspects between the ages of 18 and 55 years old. SAPS also discovered and seized cannabis plants as well as a large amount of cannabis prepared for the market.

“Searches conducted on the premises resulted in the arrest of 25 suspects aged between 18 and 55 and the discovery and seizure of cannabis plants and a large quantity of prepared cannabis ready for the market.”

Due to the high number of plants, the estimated value of cannabis at the farm has not yet been determined. The suspects are awaiting their court appearances which is scheduled for Monday, 25 April.

Investigations into the matter are ongoing

They are facing charges of dealing in drugs. Members of the SAPS’ Provincial Detectives are investigating the circumstances surrounding the matter. It’s been reported that more arrests could be made as the investigation continues.

Lieutenant General Thembisile Patekile, the provincial commissioner of the Western Cape SAPS, commended the units. Patekile further issued a stern warning to drug dealers that their illegal trade will remain high on their policing priority list.

Taxi driver arrested after being caught with R750k worth of cannabis

The South African Police Services (SAPS) in Mpumalanga arrested a taxi driver recently. The minibus driver was found in possession of 14 bags of cannabis worth around R750,000.

The SAPS Provincial Commissioner in Mpumalanga Lieutenant General Semakaleng Dapheny Manamela applauded SAPS members. Manamela commended the vigilance and alertness of members who were able to find the enormous amount of dagga in the 14 bags.

The taxi driver was allegedly transporting the cannabis on the N4 road. The 42-year-old driver of the taxi was arrested on Saturday, 9 April, at 10:35. The SAPS report revealed that members were conducting a sting operation on the N4 road. Read the full story here.