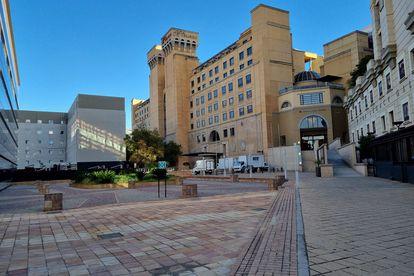 Nelson Mandela Square is one of the most popular locations in Sandton – Photo: Flickr / GCIS

Nelson Mandela Square is one of the most popular locations in Sandton – Photo: Flickr / GCIS

Canadian and French Embassies in South Africa have joined the United States and United Kingdom in warning their fellow natives to stay away from Sandton this weekend due to a possible terrorist attack.

On Wednesday, 26 October the US Embassy in South Africa said that its government has received information that terrorists may be planning to conduct an attack targeting large gatherings of people at an unspecified location in the greater Sandton area of Johannesburg, South Africa, on 29 October 2022.

In a statement, the French Embassy in Pretoria and the French Consulate General in Johannesburg called on the French community to avoid or to maintain increased vigilance during the public gatherings scheduled for October 29 and 30 in the greater Sandton area of ​​Johannesburg.

In its warning, the US Embassy said there is no further information regarding the timing, method, or target of the potential attack.

“The US Embassy has advised staff to avoid crowds of people and other large public gatherings in the greater Sandton area of Johannesburg during the weekend of 29-30 October 2022.”

Johannesburg Pride is one of the biggest events in Sandton this weekend. There are concerns that a ‘credible threat’ to LGBTQI+ citizens is now fully established, and some will require greater reassurances before turning up for the event.

The organisers of Joburg Pride said the situation has been assessed over the past 24 hours and after consultations with the relevant authorities the decision was made to go ahead with the march.

“Johannesburg Pride has not been directly threatened, nor have we received any communication from outside parties other than what the media assumed via the US Embassy’s website.

“We have consulted with the various entities, and at this point: postponing pride is hard, proceeding with pride is hard, and deciding whether or not to attend is a hard decision,”

The South African government noted the alert and said it was part of the US’ standard communication to its citizens. On Wednesday, the State Security Agency said it had received no information about the alert before the notice went live.

“Threats are assessed continuously and are acted upon to ensure the safety of all. Should the need arise; the South African government will be the first to inform the public about any imminent threat,” said the government.