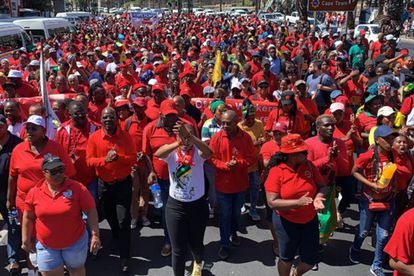 The EFF described the US Embassy’s terror alert as a self-made plot. Image: TwIitter/EFFSouthAfrica

The EFF described the US Embassy’s terror alert as a self-made plot. Image: TwIitter/EFFSouthAfrica

The United States’ Embassy in South Africa issued an alert about a possible terrorist attack in Sandton, Johannesburg on Saturday, 29 October. Other embassies have followed suit. The move has ruffled the feathers of the South African government with President Cyril Ramaphosa describing the alert as “panic driven.”

EFF DUBIOUS ABOUT US TERROR ALERT

The opposition party, Economic Freedom Fighters (EFF), demanded that the US embassy provide evidence to back up its claims and cast aspersions on the country’s foreign missions, saying they are, “well known to be information peddlers embedded in international terrorist networks.”

“It is also a historic fact that the USA invaded Iraq based on faulty intelligence: this action alone unleashed the greatest human rights violation by a government since the holocaust.

“For all we know, the CIA’s agents working with terrorist groups are the ones staging the terrorist attack so as to destabilise our country,” said the EFF.

The embassy said the US government received information that terrorists may be planning to attack large gatherings of people at an unspecified location in the Sandton area on Saturday. However, it could offer no information about the method, timing or target of the potential attack.

The EFF pointed out that it was not the first time the embassy has released such a warning. “Even then, they could never back it up with credible evidence.”

The Department of International Relations and Cooperation (DIRCO) expressed its displeasure at the manner in which the 2016 alert was issued by the embassy.

“The information provided as a basis for the latest terror alerts on South Africa has been found to be very sketchy. On closer examination, we have found the information to be dubious, unsubstantiated and provided by a “walk-in” source based on questionable conclusions,” said DIRCO.

The EFF rejected the 2022 warning as “part of a self-made plot” meant to destabilise South Africa and damage its reputation.

“If the USA really seeks to protect lives they must cooperate openly with our agencies and share evidence of their claims.”