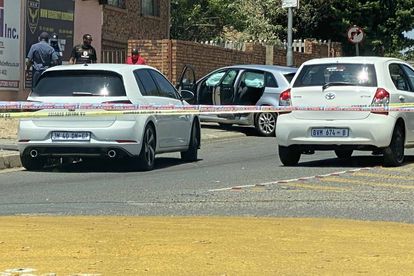 This band of thieves has learned, in the harshest terms possible, that crime doesn’t always pay: Local authorities in Gauteng confirmed that three suspects in a home invasion were shot dead by police on Wednesday, after their attempts to flee the scene at a property near Sandton went fatally wrong.

Three robbers shot dead after a high speed chase and shootout in Marlboro JHB. The men earlier invaded a house in Sandton. pic.twitter.com/5YxUbrVM28

One remaining suspect has been arrested by the police, and he is currently in custody. The home invasion took place just after 10:00. However, law enforcement officers arrived at the scene to confront the crooks. They attempted to make a getaway, but the car chase soon turned into a high-speed shootout.

Police were left with no choice but to use lethal force. They recovered two firearms from the Audi used by the robbers, which was running on false plates. The vehicle has also been identified as ‘hijacked’. A haul of stolen goods was also recovered from the motor after they were initially taken from the property. It’s understood that none of the robbery victims were injured or killed during this harrowing incident.

Fighting the law, when the law wins

The Gauteng Traffic Police has praised everyone involved in this operation – giving a special nod to those involved in the initial pursuit, and the officers who arrived for backup and scene-processing respectively. The area remained active on Wednesday afternoon, as further investigations continue into this botched burglary.