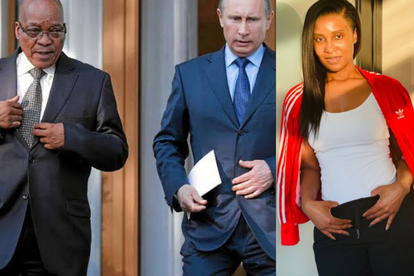 Former president Jacob Zuma’s daughter, Duduzile Zuma has weighed in on the sanctions imposed on Russia by the international community due to the ongoing conflict with Ukraine.

Duduzile said there are no sanctions imposed on Russia that will last too long. This, after Russian military forces attacked Ukraine, with air and missile strikes being launched in cities and military bases in the country (Ukraine).

The European Union (EU) and United States (US) is gunning for Russia’s President Vladimir Putin as well as his Foreign Minister Sergey Lavrov, over the invasion of Ukraine, by freezing their assets in the region.

At least 137 people in Russia’s neighbouring country have been killed and there are fears the figure could rise dramatically.

Former President Jacob Zuma’s daughter seems to think that this is just a futile exercise, in fact the sanctions will backfire. Duduzile, who also praised Putin this week, took to Twitter again to express her opinion on the sanctions imposed on Russia by the international community.

“The sanctions will actually backfire. Russia is too big and too strategic of a country. Don’t tell me about soccer or Formula One, that’s nothing. For the sake of the European economy sanctions will be lifted,” Zuma said.

The EU first approved the move to take action against Vladimir Putin and his associates on Friday afternoon, 25 February 2022.

The US was next to strike, targeting other members of Putin’s inner circle, including several members of Russia’s National Security Council like Defence Minister Sergei Shoigu and Chief of General Staff of the Russian Armed Forces Valery Gerasimov.

“Treasury has previously designated eleven members of the Russian Security Council and will continue to impose costs on the ruling elite as Russia prosecutes this brutal war of choice,” the US Treasury Department said.

ALSO READ: Kremlin claims Putin is ready to send delegation to Minsk for talks with Ukraine