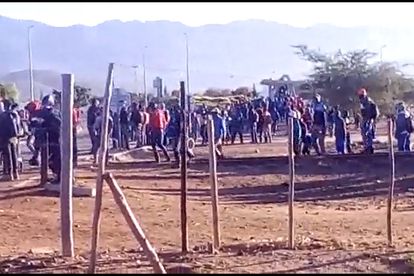 The Department of Employment and Labour has confirmed that it met with agricultural employers in Robertson on Saturday, to discuss the alleged employment of suspected illegal foreign nationals on local farms.

On Thursday, 17 March 20202, chaos erupted between Basotho and Zimbabwean nationals over alleged competition for farmspace between the two groups.

Earlier on Thursday, a number of people sustained moderate injuries in the fighting between the groups from Zimbabwe and Lesotho. While on Thursday evening, a group of people sought refuge outside the Robertson police station over fears of possible attacks.

“Overnight, a sporadic incident where one group took ownership of the property of another was quelled by SAPS deployment and the suspects fled to a nearby hill,” South African Police Service (SAPS) spokesperson in the Western Cape, Brigadier Novela Potelwa said

Potelwa said additional Public Order Police (POP) officers were sent to Robertson to continue to monitor the situation, on Friday,17 March. Air support was also sent to the area to help keep an eye on things.

DEPARTMENT OF LABOUR TO PROBE EMPLOYMENT

According to Western Cape Chief Inspector, David Esau, there are no records from the Department of Employment and Labour indicating that corporate visas were issued for any foreign nationals to work on the farms, prompting the department to launch an investigation into the allegations.

Esau said before launching an investigation into the allegations brought forward to the department, they felt it was necessary to visit the area and engage with relevant role-players.

“In collaboration with the Department of Home Affairs and the local SAPS, the department will conduct joint inspections on all farms in Robertson to determine whether employees are adhering to labour legislation and following proper procedures when facilitating recruitment at their workplaces.”