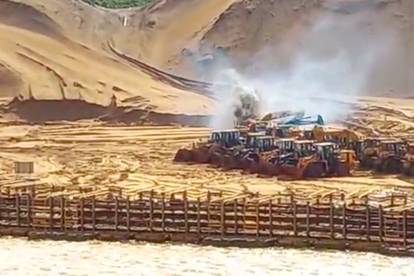 Police are investigating a case of malicious damage to property after arsonists set heavy machinery alight at Richards Bay Minerals in KwaZulu-Natal.

The latest violence follows the murder of the mine’s senior manager Nico Swart who was shot dead in a hail of bullets on his way to work two weeks ago.

KZN SAPS spokesperson Colonel Thembeka Mbele said the police were investigating a case of malicious damage to property after a case was opened at KwaMbonambi SAPS.

A video of the Richards Bay arson attack was circulated on social media at the weekend. View the video here.

“It is alleged that on 4 June 2021 at 11.30am, a group of community members arrived at the business premises and burnt four machines. The circumstances surrounding the incident are being investigated,” Mbele said.

Premier Sihle Zikalala condemned the violence and arson at RMB during his provincial address to the media in Durban on Sunday.

“We want to condemn the recent incidents of killings and arson at Richards Bay Minerals (RBM). As Government, we are committed to working with all stakeholders to bring stability in this important economic belt of our province,” Zikalala said.

“We have full confidence in the capacity of our law enforcement agencies to bring to justice all those ring-leaders behind the economic sabotage that is taking place in and around RBM,” he said.

Minerals and Energy Minister Gwede Mantashe, together with a delegation from the KZN Government, visited Richards Bay to assess the situation and to meet with RBM’s senior managers.

“We continue to send a message to all community members to play their role in safeguarding their investment and livelihoods brought through RBM,” Mantashe said.

“If RBM collapses, it is people’s livelihoods that will be severely affected.  Let’s expose the criminal elements involved, and rise up against all those who are destabilising our economy, especially at such a critical time.”