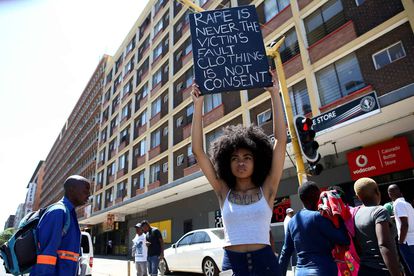 Teen activist Zulaikha Patel and member of the Black Radical Feminists hold a placard during their silent protest against gender based violence, rape and abuse near the Magistrate Court on 30 November 2018 in Pretoria. Photo: AFP/Phill Magakoe

Teen activist Zulaikha Patel and member of the Black Radical Feminists hold a placard during their silent protest against gender based violence, rape and abuse near the Magistrate Court on 30 November 2018 in Pretoria. Photo: AFP/Phill Magakoe

Following International Women’s Day on Sunday 8 March, South Africa still has a long way to go in terms of ensuring that the rights of women are respected.

In his weekly newsletter, President Cyril Ramaphosa said that despite South Africa having some of the most progressive systems in place to ensure that women are empowered, the reality is not reflecting this, with women still bearing the brunt of poverty and crime.

“Vast discrepancies exist between the protection these laws offer and what women experience.

He said that women in public service had seen increased representation, but noted that in business and academia, there exists a highly skewed optic.

“While the representation of women in the public service has increased dramatically over the last 25 years, we have not seen similar progress in business or academia.

“There are some areas where we have gone backwards; for example, nearly all directors-general in national government are men. This highlights the fact that there is still a long journey ahead, and that the gains we make can be undone unless we are vigilant and focused.”

Although Ramaphosa pointed out that South Africa has done well to promote laws around reproductive health sexual orientation, access to justice and the right for women to gain access to education, it’s impossible to turn a blind eye to the scourge of gender based violence and the daily death tolls that result.

“Our efforts on the continent must start at home. We need to urgently address the continued economic marginalisation of South African women and their vulnerability to gender-based violence.

“It is six months since we began implementing the Emergency Response Plan to combat gender-based violence. Though there has been demonstrable progress in key areas such as access to justice and support for victims, women and girls continue to die at the hands of men.”

Indeed, the 2019 Crime Against Women in South Africa Report by Statistics SA in shows that femicide (the murder of women on the basis of their gender) is five times higher than the global average, with the horrific killing of eight-year-old Tazne van Wyk the latest in a spate of crimes that have sent the country into a state of outrage over the way in which our women are treated.

Ramaphosa said that as South Africa had assumed the chair of the African Union (AU) in February, the position could be used to try and improve these circumstances.

“We placed the empowerment women firmly on the agenda of our continental body. In particular, we will dedicate this year to the economic and financial inclusion of African women,” he said.

“During our term, we will work with other AU members states on a range of measures, such as increasing the percentage of state procurement that goes to women, and encouraging member states to reduce barriers to entry for women-owned businesses. We will work to ensure that women benefit from the opportunities that will be created by the African Continental Free Trade Area, which comes into operation this year.”