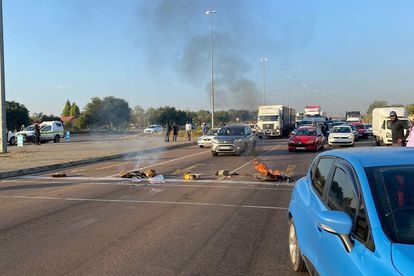 Centurion residents took to the streets to protest against not having electricity since the weekend. Photo: Yusuf Abramjee/ Twitter

Centurion residents took to the streets to protest against not having electricity since the weekend. Photo: Yusuf Abramjee/ Twitter

Centurion residents burnt tyres and blocked the R55 again on Thursday, to protest against not having electricity.

The protest started on Tuesday evening after residents were without electricity since the weekend.

Burning tyres and rocks were placed on the R55 in the morning by residents to force the City of Tshwane to attend to their electricity problem.

Resident Antonio Boshielo said the reason they blocked the road is to inconvenience motorists travelling between Laudium and Sandton, so the City can attend to their problem.

Traffic in the area was affected and the road has since been opened.

Tshwane Metro Police and SAPS are still at the scene monitoring the situation.

Boshielo said the electricity issue has been going on for the past month, that is why they decided to protest.

“The reason we have no electricity, it’s due to the cable that gets stolen every weekend on the R55.

“This theft usually happens over the weekend and it takes the City of Tshwane about two days or so to repair,”

COULD THIS BE SABOTAGE?

Residents are frustrated by the fact that the City always replaces the cable but it ends up getting stolen again.

They are questioning why the metro is doing much to make sure the cable does not get stolen again.

“This could be sabotage. The people who replace the cables probably tell their people when to go steal the cable so they can get paid for overtime to replace them again.

“Why doesn’t the city secure the place once the cable has been replaced? They can put in reinforcement and put concrete over it so that thieves are not able to dig it up again,”

CABLE THEFT IS A LONG-STANDING PROBLEM

In March residents of Laudium were without electricity for over 5 days.

Meanwhile, at the same time, several parts of Pretoria North, East and West were without electricity apparently due to an illegal strike by City of Tshwane employees.

City of Tshwane spokesperson, Selby Bokaba at that time said some areas were still without electricity because cables were stolen.

Bokaba said the people who know where those cables are may have been the ones that laid them.

“Whether it is contractors or whether it is employees, it is difficult to tell but these are people who know where the infrastructure is. They go and switch off at the specific place and steal those cables,”