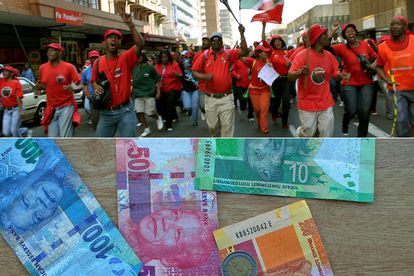 The majority of public servants who qualify for pay progression have been offered a 7.5% pay rise. Photo: Nigel Sibanda and stevebeck66 / Flickr

The majority of public servants who qualify for pay progression have been offered a 7.5% pay rise. Photo: Nigel Sibanda and stevebeck66 / Flickr

It has been reported that the South African Government officially tabled pay increase offers of up to 7.5% for the majority of public servants. Some public servants have been limited to 6%.

Lower-paid workers may benefit more from the proposed increase

EWN reports that a big amount of the proposals is leveraged on the R1 000 disposable income. This was introduced in 2021 and if the proposals are accepted, it would benefit some of the lower-paid workers.

Treasury reportedly budgeted approximately R20.5 billion to fund salary adjustments for the 2022/23 financial year. However, the new proposals that have been tabled could see this amount increase by more than R7 billion.

What exactly was the offer tabled?

The initial offer was 4.5% or R1 000 after tax. This was tabled last month but labour unions sent negotiators back, demanding that the employer needs to find more money for a larger increase.

EWN reported that sources said on Monday, 20 June, when talks resumed, an offer of 1.5% cost of living adjustment plus the R1 000 gratuity was made, effective from 1 April 2022. This equates to a 6% raise.

This, however, does not account for those who qualify for pay progression. These workers were offered 3% cost of living adjustments as well as the R1 000. This amounts to a 7.5% pay raise.

The aforementioned group makes up the largest amount of the 1.2 million public service employees.

Labour unions initially had a higher demand but negotiations are continuing

Negotiations on the matter are expected to continue on Wednesday, 22 June. The unions will make compromises on the demands as the negotiations continue.

This is Parliament’s excuse for giving MPs, and ministers a PAY INCREASE

In similar news, it was previously reported that the 3% pay increase for MPs, deputy ministers and ministers has been DEFENDED by Parliament. Speaking about South African public representatives, the national legislature said they were not highly paid. This came after the pay was benchmarked against international counterparts.

Last week, President Cyril Ranmnaphosa accepted the pay increase for the salaries of politicians and other government officials by 3%. These approved increases for MPs, deputy ministers and ministers will also see Ramaphosa’s money go up.

The President’s salary will increase from R2.9 million to more than R3 million. Public and labour unions are far from impressed by these increases and have made their thoughts on the matter public. Read the full story here.