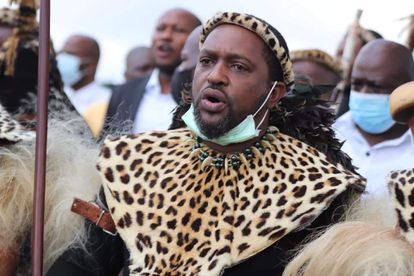 The preferred king for the Zulu nation, Prince Misuzulu Zulu is reportedly back at the KwaKhangelamankengane Royal Palace in KwaNongoma after his convoy which was used to whisk him out of the palace on Friday night was spotted at the Royal Palace on Saturday afternoon.

Zulu was whisked away into safety by police when commotion and chaos ensued after he was announced as the preferred king for the Zulu nation by his late mother, the Regent of the Zulu nation, Queen Mantfombi Dlamini-Zulu who recently passed away.

Traditional Minister for the Zulu nation, Prince Mangosuthu Buthelezi is set to address the media at 16:00 on Saturday about the latest AmaZulu succession plans.

IFP President Velenkosini Hlabisa said that the IFP welcomes the announcement of Prince Misuzulu as the heir of the throne and is looking forward to the his coronation.

“In the midst of a painful time of loss for the Zulu nation, hope has risen with the naming of an heir to the throne. The IFP welcomes the announcement of His Royal Highness Prince Misuzulu Sinqobile kaZwelithini as the heir apparent to the throne of his father, His Majesty King Goodwill Zwelithini kaBhekuzulu.

“The wisdom of the late regent, Her Majesty Queen Shiyiwe Mantfombi Dlamini Zulu, was evident again through her last will and testament which was read last night.

“The IFP looks forward now to the coronation of His Majesty King Misuzulu kaZwelithini, knowing that his reign will continue an uninterrupted lineage of leadership that has seen the Zulu nation thrive for more than 200 years, since its founding by King Shaka kaSenzangakhona,” Hlabisa said.

The Economic Freedom Fighters and the South African Communist Party in the Moses Mabhida region have also welcomed Prince Misuzulu as the new king for the Zulu nation.