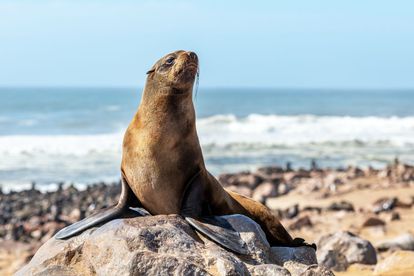 The world’s largest and heaviest living carnivore is not a big cat, a bear or a wolf: it’s the southern elephant seal (Mirounga leonina). Bulls of this species can be 5 metres long and can weigh up to 3 500kg. The Cape fur seal, meanwhile, can grow to 3.9 metres and weigh up to 360kg. A large African lion, by comparison, weighs 250kg.

So you might think that the ancient ancestors of these and other large seals would leave ample evidence of their presence in the fossil record. That’s partly true; there is an extensive global body fossil record for seals. But, until now, there’s been no documented evidence of fossilised seal traces – the tell-tale signs of these big animals dragging their flippers while hauling themselves along ancient beaches.

Our new research, from South Africa’s Goukamma Nature Reserve on the country’s Cape south coast, changes that. The traces we discovered and described are from two sites that date back about 75 000 years.

This adds to our existing knowledge about what kinds of animals roamed this landscape long ago, as well as what the landscape may have looked like – an important part of understanding what’s changed over time and how it might change as the climate shifts.

The Cape south coast ichnology project started in 2008. Ichnology is the study of tracks and traces. Since then our team has identified more than 300 vertebrate tracksites along a 350 km stretch of the South African coastline. The tracks and traces date back to the Pleistocene epoch, which started around 2.6 million years ago and ended 11 700 years ago.

The tracks and traces are found in aeolianites (the cemented remains of dune surfaces) and cemented beach deposits. The fossil sites have provided a census of which creatures left traces of their passage on those ancient dunes and beaches: elephants, crocodiles, large birds – and even hominins, human ancestors. There were tiny members of this varied community, too; we’ve reported on gerbil and spider tracks and traces.

Seals’ absence from the global ichnology record can probably be explained by these mammals spending much of their time in the ocean, and to a preference for rocky islands, cliff-side ledges, and pebble beaches when they do come ashore. None of these environments would preserve fossil traces of seals.

However, large colonies can be found on remote sandy beaches, and individual seals often haul up on beaches, both of which might leave a trace fossil record.

One of the sites we studied was situated on a north-facing slope of a sand-bar and shows a furrow created by sliding down the slope, complete with hind-flipper drag marks. There are parallel grooves and nested grooves adjacent to it, consistent with front-flipper traces. Taken together, these features are more consistent with traces of a fur seal than those of an elephant seal. Both species occur on the coastline today, but Cape fur seals are far more common.

Cape fur seals often gather into dense rookeries, some of which contain hundreds of thousands of seals; one such rookery can be found at Cape Cross in Namibia. Seals in rookeries on beaches may create depressions in the sand that are moulds of their outlines, and this is what the evidence at the second site suggests. Four large impressions are consistent with moulds of juvenile seals, and one of these contains what appears to be a flipper impression.

Microscopy of thin sections sampled from the rock surfaces enabled us to ascertain that both sites are from beach rather than dune environments. This helped to corroborate our interpretation of the tracks as seal traces. Meanwhile, optically stimulated luminescence dating studies performed at the University of Leicester indicated that the seals inhabited these beaches about 75 000 years ago.

The notion of seal traces, made so long ago on these beaches, being evident on rock surfaces today can be regarded as remarkable. Our findings help to fill what was a substantial gap in the global ichnology record. Our discoveries will hopefully spur researchers elsewhere to look for similar traces to better understand what parts of the ancient world seals occupied, and when.