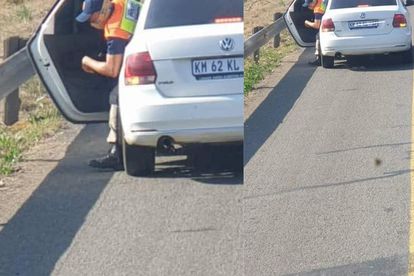 Trucking companies have been warned of fake metro cops targeting freight drivers on major highways in the country.

The SA Long distance Truckers page on Facebook sent the warning to its trucking community to be on high alert over these bogus metro cops operating on the N3 and N12.

“As received! All Operating Companies please warn your drivers to be on the lookout for this suspect vehicle. Fake Metro cops operating on the N3 and N12 pulling trucks over to hijack them. Drivers must press the panic alarm and inform controllers when stopped by these robbers”.

This alert was also confirmed by FlyNews Live Update ZA emphasising that drivers must immediately press their panic alarm and inform their controllers when encountered by these men.

The photograph making rounds depict a man in a metro police reflector jacket coming out of a stationary white VW Jetta which is used in the commission of the crime.

The reflector jacket or uniform worn by the impersonator cannot be easy identified due to the quality of the image; however, the number plate of the vehicle is easily identifiable.

WHAT TO DO WHEN YOU FEEL UNSAFE

In the wake of this concerning behaviour, there are measures to take when you feel unsafe when being stopped by ‘metro cops’.

According to Legal and Tax, they advise that you follow the ‘blue light protocol’ which are:

If you happen to stop always make sure of the following: