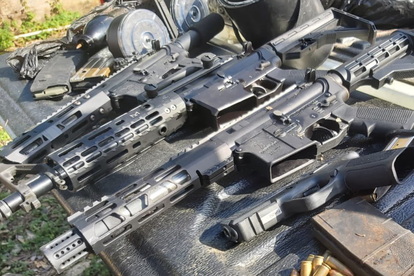 A shootout between Free State police and robbery suspects turned the streets near Pellissier in Bloemfontein into the Wild West on Friday evening.

The provincial police received information about heavily armed robbers who had hit a liquor store more than 200 kilometres away in Aliwal North, Eastern Cape.

Law enforcement launched a manhunt, later spotting the vehicles – a white Mercedes-Benz and a maroon Toyota Hi-Lux – fitting the same description as the cars the suspects drove near a casino in Bloemfontein. The cops tried to intercept them, but the suspects made a run for it.

Police spokesperson sergeant Sinah Mpakane said a chase ensued, with the suspects firing shots at the pursuing officers. The cops retaliated and, after a short chase, caught up to the alleged robbers.

Mpakane said officers later tracked the second vehicle down in Bayswater, 14 kilometres outside Pellissier. They found the Merc abandoned but recovered one bullet cartridge that pierced the car. No one was injured, and the third suspect was nowhere in sight.

The two men will appear in the Bloemfontein Magistrate’s Court on Monday, 27 June, facing charges of attempted murder, defeating the ends of justice and reckless and negligent driving.

Meanwhile, cops are still struggling to make arrests after launching a manhunt for suspects linked to the recent robbery at the Kwaagafontein police station near KwaMhlanga.

Heavily armed men allegedly entered the station at about 22:00 on Wednesday, 15 June, and held up officers and other employees at gunpoint. Afterwards, they took an unknown number of police-issued firearms and fled the scene.

In the immediate aftermath of the robbery, Mpumalanga top cop lieutenant-general Semakaleng Daphney Manamela launched a manhunt for the suspects. She committed, at the time, that police would track down and arrest the suspects within 72 hours of the crime.