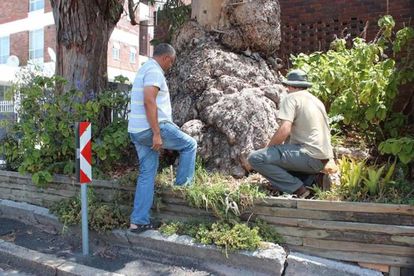 Earlier in January, the City of Cape Town’s horticulturalists carried out a site inspection in Kenilworth and confirmed that a gum tree that was between 75 and 100 years old had been poisoned.

The city slammed the “malicious” poisoning of this large gum tree in Wessels Road, Kenilworth, which have brought the total of gum trees poisoned since late last year to ten.

In October 2019, the city’s Recreation and Parks Department investigated the poisoning of nine gum trees in Durbanville’s Racecourse Road. There is a possibility that more trees could be poisoned.

At the time, various methods of poisoning were being used, such as applying a herbicide to the soil in small pools around three trees. Others were poisoned by full spray cover and infected by poison injected into drilled holes in the trees, as seen in Kenilworth.

A criminal case was opened by the Recreation and Parks Department with the South African Police Service (SAPS) at the time.

Poisoning of leafy giant in Kenilworth

“Several holes were drilled around the base of the tree and a herbicide injected into the holes, leaving a blue stain. It is estimated that the tree could be measuring 25m in height and is 16m in width.

“The poisoned gum tree is dying and will have to be removed before it becomes a danger to the surroundings,” said the city in a statement.

First introduced to South Africa around the 1870s, the Eucalyptus gum was a species prized for its strong wood. Gum trees were also planted throughout Kenilworth, as well as the Western Cape as street and park trees. At the time, they were popular and used to provide timber and firewood.

Gum trees grow fast, are drought resistant, offer shade and protection from the wind — as well as keeping our honey bees abuzz.

According to invasives.org.za, gum trees provide the pollen and nectar that honey bees need to build a strong and healthy colony. In South Africa there are about 85 different species of introduced gum trees.

Because they flower at various times of the year, they provide a constant and reliable flow of nectar and a source of pollen, making them essential to the beekeeping industry.

“The intentional destruction of trees is worrying as it indicates the lengths some will go to, to destroy trees that play such a vital role in the eco-system and urban landscape,” said councillor Zahid Badroodien.

He said the city viewed the poisonings in a serious light and would investigate the matter to ensure the perpetrators were held accountable.

According to Badroodien, there was no way to cure a poisoned tree and early detection is virtually impossible.

“People can’t easily see if a tree is poisoned. We drive past and sometimes don’t even take notice of the trees along the road. In most instances, only when the branches are dead do we notice that something could be wrong.”

Where to report harmful activity to trees

“Residents that notice any harmful activity towards trees located on city-owned land should inform the Recreation and Parks Department. We should take pride in our community parks and open spaces – these spaces are located in communities, for use by communities,” said Badroodien.

‘We would like to thank members of the community who reported these incidents. We can only act swiftly if the community works with us and reports any destruction, vandalism and poisoning of trees. Protecting our natural heritage and environment is an investment that will allow future generations to enjoy the many benefits of trees in a green urban environment. Caring for and protecting trees also says a lot about respect for nature,” the councillor said.

Badroodien asked residents to inform the city arborist of suspected poisoning by e-mailing arborist@capetown.gov.za or calling one of the council’s emergency numbers (107 from a landline, 021-480-7700 from a cellphone).