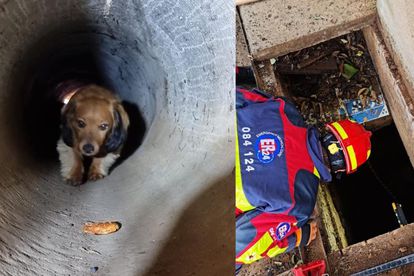 CSS and ER24 assist in rescuing a dog. Photo: CSS.

CSS and ER24 assist in rescuing a dog. Photo: CSS.

A missing dog was finally reunited with its family after being rescued from a drain in Weltvreden Park, Roodepoort.

Today, Tuesday, 19 July, a local security company, Community Support Services (CSS) received a call about a dog crying for help inside the drain.

HOW THE MISSING DOG WAS DISCOVERED

“We received a call for assistance for a dog stuck in a drain in Weltevreden park.

On arrival we opened up the drain cover and had a look inside where we found the dog walking around the drain,” CSS reported.

CSS said they attempted to call the dog over to their end but he didn’t respond or move.

After the dog was rescued, the furry friend’s heroes treated him.

“We gave the dog some water before we took him through to the Johannesburg Specialist Veterinary Centre JSVC on Kayburn where they scanned the dog for a chip which it had.

The owner was contacted and came through to the vet to collect Brownie,” CSS further reported.

During the collection, it was discovered that Brownie had gone missing for a couple of days.

“After 8 days being missed by his family, Brownie is now home safe and sound with his owners”.

This rescue effort strengthened by teamwork reminds many of Khayalethu Magadla, the young boy who fell inside a manhole in Soweto.

It took almost a month for the body of the Khayalethu to be recovered following an intensive search along the sewer line.

Khayalethu was laid to rest in Bityi in the Eastern Cape on Saturday.