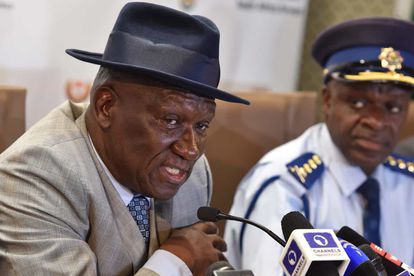 Police Minister Bheki Cele on Monday promised disgruntled residents of Philippi East in Cape Town that proper interventions will be made to address policing in the area which has hit news headlines following the murders of 13 people at the weekend.

“I’m saying that we will need five days to look at your memorandum and address your grievances but will be acting on catching the criminals. I heard that you want a station commander since the current commander is away on sick leave, I therefore hope that when we place a permanent station commander things will become better.”

“Tomorrow we will have a meeting for the security cluster, and I promise you that after the meeting, there will be a change that you will see in the community. I won’t tell you what the change is gonna be, but you as the people will see that there is a change and that is after 24 hours.”

Cele addressed about 200 residents at the Philippi East community hall during his visit to the area. The visits follow the killing of 13 people who were shot and killed since Friday.

Police were alerted at about 23:00 on Friday night to the discovery of six bodies of women between the ages of 18 and 26 at a home in Marcus Garvey. The women were shot dead by unknown suspects, police spokesperson FC van Wyk said in a statement on Sunday:

“On Saturday night, in two separate shooting incidents, five men aged between 18 and 39 were shot dead and another was wounded. The motive for the murders is unknown at this stage. The circumstances surrounding the incident are being investigated and more information cannot be released at this stage.”

“The motive for these shooting incidents remains the subject of an intensive police investigation. From an investigation perspective, detectives with crime intelligence are hard at work following leads that could result in the arrest of the perpetrators of these incidents.”

How you can help

Meanwhile, community members with any information about the shootings were urged to contact the investigating officer Warrant Officer Larry Arnoldus 079 880 9822 or Crime Stop on 08600 10111. All information received would be treated with the confidentiality required.