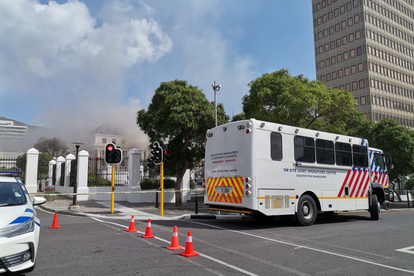 Parliament officials have called for calm amid immense speculation over the fire. Image: City of Cape Town/ Twitter

Parliament officials have called for calm amid immense speculation over the fire. Image: City of Cape Town/ Twitter

Parliament Presiding Officers have called for calm in the aftermath of the fire at the National Assembly. In an update on the incident, the officials assured South Africans that every effort is being made to ensure Parliament work continues.

“The Presiding Officers of Parliament are assuring the citizens of South Africa that all efforts will be made to limit any disruption of the business of Parliament following the fire that gutted parts of the Parliamentary precinct today.”

Parliament: SONA, Budget Speech will go ahead as planned

The statement confirmed that the fire had taken place at a point in time when preparations for the 2022 State of the Nation Address and Budget speech were ‘at an advanced stage’.

“The Presiding Officers have confirmed that these flagship programmes of Parliament will not be affected by this unfortunate incident.”

The Speaker of the National Assembly (NA), Ms Nosiviwe Mapisa-Nqakula, and the Chairpersons of the National Council of Provinces (NCOP), Mr Amos Masondo commended the Cape Town Fire and Rescue Services for their swift response.

“Had it not been for their prompt response, the damage could have been much worse. They responded within six minutes after they were called and alerted.”

Interestingly, it seems as if immense efforts to bring the fire under control have not yet succeeded.

“The firefighters fought the blaze throughout the day, bringing under complete control fire in the NCOP offices, and continued to battle the flames in the NA Chamber and some offices that were severely gutted by fire. Significant damage has been caused to the New Assembly Wing, which includes the NA Chamber. The fire in these areas has almost been extinguished.”

In the statement, the arrest of an individual in connection with the fire at Parliament has been welcomed.

“The Presiding Officers, who have urged the law enforcement agencies to leave no stone unturned in establishing the cause of the incident, have welcomed the swift arrest of a man in connection with the incident.”

In conclusion, the officials called for South Africans to remain calm and avoid speculation over the incident.

“They have appealed for calm, cautioned against any speculation and encouraged everyone to afford the law enforcement authorities space to investigate and provide the much-needed conclusive information.”