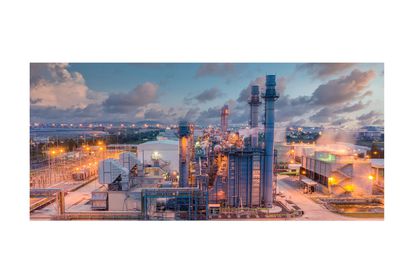 While South Africa has been preoccupied with rolling electricity blackouts, security of liquid fuels supply has been overlooked even though – by my calculations – by value of sales it is 60% larger than electricity sales.

The one liquid fuels related story that attracted attention in the local media was the temporary closure of an inland oil refinery due to delays in crude oil supplies. The refinery is owned by Natref, a joint venture between the chemical and energy company Sasol – the majority shareholder – and Total Energies.

No details have been given about the closure. But it is a rare occurrence and probably a consequence of disruptions to global logistics and oil supplies caused by Russia’s invasion of Ukraine.

Natref is the last surviving oil refinery in South Africa. Three others were closed in the past two years.

These refinery closures and the possible permanent closure of the Natref refinery are shots fired in the long running contestation between the oil refiners and the government, which has been trying to introduce cleaner fuels specifications. And, in parallel, policies requiring oil companies to keep some stocks to act as a buffer against occasional supply interruptions.

Both policies are in line with international trends.

The attempt to move to cleaner fuel specifications began in 2006 and is aimed at assisting the domestic auto manufacturing industry, which produces mainly for European markets, where engines need to match Europe’s cleaner fuels.

The oil industry’s response to the government’s cleaner fuels initiatives has been robust. Initially, it sought to blackmail the government by threatening closure unless the government gave it the capital to upgrade its refineries, without any consequent ownership rights. The industry euphemistically termed this a “cost recovery mechanism”. The government eventually backed down from its deadlines. But it did not succumb to the demands for cash gifts.

In the latest round, the two Durban refineries made good on their threats. Engen (Petronas) in 2020, following an explosion and fire, and Sapref (Shell and BP) after its temporary closure during the insurrection in July 2021. Natref appears to be playing a waiting game on the government’s latest deadline, which has been shifted from 2023 to 2027.

If the government holds the line Natref may also close, with possible knock-on effects for Sasol’s coal-to-liquids plant in Secunda, whose production is partially integrated with Natref’s.

The closures of South Africa’s small, old and inefficient refineries are economically painful in the short term. But they also offer the prospect of better outcomes – economic, environmental and security of supply – if government acts sensibly, particularly in relation to electric vehicles.

The government has pursued an import substitution industrialisation approach to the liquid fuels industry since the 1930s and has used various regulatory instruments to protect the oil refiners.

But the need to move to cleaner fuels to support local auto manufacture has proved to be a tipping point. The difficulty for the auto manufacturers is that it does not make commercial sense to manufacture two engines for each vehicle – one for South Africa’s dirty fuels and another for Europe’s cleaner fuels. The domestic auto industry has, like refining, long been protected by the government. It occupies a key position at the heart of South Africa’s manufacturing industry and its interests appear to have been chosen over those of the oil refining industry.

The refinery closures hold implications for the future of auto manufacturing and transport in the country.

There is a good prima facie case for South Africa to switch to electric vehicles. Imported US dollar denominated petroleum could be substituted by mainly rand denominated solar and wind-based power generation. The productivity gains from more efficient electric vehicles and the impetus to South Africa’s emerging battery manufacturing industry are part of the case. This could also be seen as the ultimate version of the government’s long-running import substitution industrialisation.

The closure of the oil refineries has actually made it easier for the government to switch its attention to electric vehicles, which would also assist in meeting its international emissions targets. It also means that the adjustments envisaged in the just energy transition have, in effect, already happened in the refining industry.

Returning to the question of security of supply for internal combustion engines, there are also advantages for the government in so far as strategic stocks are concerned. Since there are fewer oil refineries, less crude oil stocks are required. This may be a good thing given the troubles associated with them.

Firstly, there is the economic argument that strategic stocks sterilise large quantities of cash. In turn, this has a high opportunity cost in South Africa with its many other pressing social needs.

The Minister of Mineral Resources and Energy told Parliament in 2022 that the strategic oil stocks were valued at R1 750 764 252.

Secondly, there are governance issues. In 2015 the Strategic Fuel Fund illegally sold 10.3 million barrels (the entire stock) at bargain basement prices to oil traders. In 2020 the High Court returned the stocks to the fuel fund.

The closure of oil refineries has inadvertently provided a windfall for fuel users – it has allowed government to sell off some of the stocks and use the proceeds to subsidise fuel prices during an oil price spike.

These subsidies are to be partially funded by the sale of strategic oil stocks to the value of R6 billion. By my estimates this represents approximately half of the strategic stocks, which leaves a bit more than the surviving refineries need.

A much better solution would be to hold strategic stocks of refined products in the inland market, which is approximately 60% of the South African market. Although discussed in government at least 20 years ago, this option has not been pursued.

Does the closure of the refineries affect South Africa’s security of supply? Not much. The country has merely swapped reliance on crude oil imports for refined product imports. Rather than international supply risks, the bigger risks seem to be domestic.

So what is the government’s policy on the security of supply?

The 1998 White Paper on Energy Policy said that the government would maintain three months of oil supplies. But there has never been a budget allocation to allow the country to reach this level.

In 2012 government gazetted a draft plan proposing that its holdings be reduced to 60 days, supplemented by the industry holding 14 days of refined products. The draft has never progressed to a final policy, probably due to financial constraints and the industry’s unwillingness to foot a part of the bill.

There has been no shortage of ideas and policy proposals on strategic stocks in democratic South Africa. The shortage is of cash to fund the ideas. Given South Africa’s increasingly constrained finances, there seems to be little prospect of security of supply being resolved soon. Security of supply may only be improved when South Africa switches to electric vehicles.