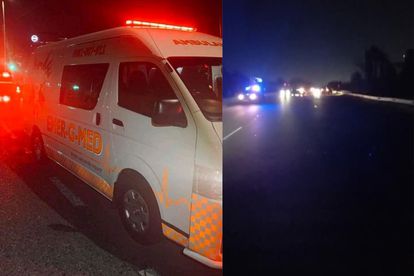 Emer-G-Med paramedics who were among the first responders detailed the incident.

“Earlier this evening Emer-G-Med paramedics responded to the scene of a shooting incident on the M13 highway in the vicinity of the Paradise Valley, just after the Stapleton Road bridge.

“On arrival on scene it was established that shootout had occurred between the South African Police Service (SAPS) and armed suspects,” the statement read.

“Two men alleged to be suspects, were found to have sustained fatal gunshot wounds and were declared dead on arrival of paramedics.”

Upon further assessing the M13 highway scene, Emer-G-Med discovered that no police were wounded after the shootout.

“There were no police members injured in the ordeal.”

An official statement regarding the incident and the events preceding it will be issued by the South African Police Services accordingly, the medics notified.

So long, a video making rounds posted by Denzil Govender on Facebook at the scene suggests Marshall Security, Durban Metro Police and SAPS worked together to take down these suspected criminals.

ALSO READ: One killed during shootout with police in foiled truck hijacking

SUSPECTS INJURED AND KILLED IN A SEPARATE CHASE

The M13 highway shootout comes a day after multiple armed robbers were shot at during an N2 high-speed chase.

According to Marshall Security, the N2 south bound just after the Tongaat Toll Plaza was a huge crime scene after multiple armed suspects were shot, some deceased and others sustaining critical injuries.
The suspects were pursued by various units after they committed a business robbery in Empangeni, north of the province.

“Both vehicles overturned, around a kilometre apart, and further investigation led to the discovery of the items stolen in the armed robbery, as well as multiple unlicensed firearms. Fortunately none of the first responding role players were injured during the shootout”.