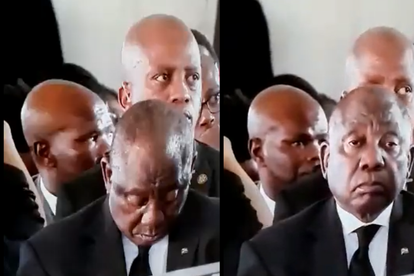 Tweeps have disputed claims that President Cyril Ramaphosa was dozing off during the funeral of the Enyobeni Tavern victims but was instead in “deep prayer”.

Ramaphosa was caught on camera with his eyes closed and head down during the proceedings, several times.

President Cyril Ramaphosa along with other national and local government leaders attended the funeral of the victims of the Enyobeni tragedy in Scenery Park, East London.

On Sunday it was reported that 21 people who have since been identified as underage children died under mysterious circumstances. There have been many theories as to how the teenagers may have died, however, police have made it clear that the cause is not yet known and investigations are still ongoing.

LEGAL DRINKING AGE TO INCREASE TO 21?

President Cyril Ramaphosa delivered the eulogy at the funeral which was held at Scenery Park Sports Ground. Ramaphosa said taverns which sell alcohol to children must be closed down permanently.

“We cannot lose more children to alcohol. These are not places where our young people should find themselves,” he said.

The President further said that government would seek to debate the legal drinking age, with a view of adding three years onto the threshold. He believes this will go someway towards combating underage alcohol consumption, particularly in taverns.

“I have been receiving messages from people saying, Mr. President, maybe the legal age of drinking alcohol should be lifted to 21. I believe we now need a national debate on this matter”

In one of his weekly newsletters to the nation Ramaphosa spoke out about the tragic event at Enyobeni Tavern and the growing trend of underage drinking.

This trend was not only illegal but also psychologically and physically detrimental, he said.

“The increased social acceptability of young people drinking alcohol has become a serious problem in a country where the majority of the drinking population are already classified by the World Health Organisation as binge drinkers,” he said.