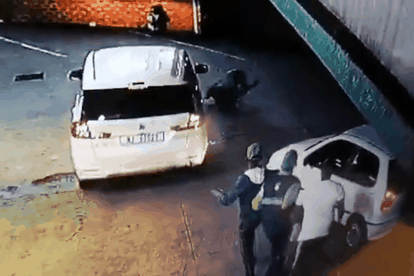 A heated exchange at a petrol station in Berea, Durban this week saw an act of road rage explode on the forecourt. Police are looking for a motorist who became embroiled in some form of disagreement with staff at a BP garage, who then proceeded to resolve the dispute by running one of the petrol attendants over.

The extraordinary clip was shared online on Wednesday. It’s gained thousands of views and shares on social media, as it’s one of those that must be seen to be believed. CCTV cameras were trailing the late-night incident, as the situation became noticeably tense next to the pumps.

With several attendants holding card machines and engaged in dialogue with the driver, it’s clear something is a miss. An unverified source suggests that there was an issue with a payment. Regardless of the situation, the hot-headed motorist had no excuse for his potentially-lethal behaviour.

As he attempts to drive away from the argument, the staff try to block his exit. However, the driver powers through before sending one of the unfortunate employees over the bonnet, before dumping him on the floor. The vehicle then speeds off into the night, leaving staff at the garage utterly bewildered.

The hunt is on

Thankfully, the victim only suffered minor injuries, and no fatalities were reported in Durban. The cops, however, have opened an investigation into the case. They are looking for the owner of a White Suzuki Ertiga – license plate number NJ 61529 – who ended up causing the heart-stopping scene at the Randles Road facility.

The worst thing about this hit-and-run incident is that the man who gets ploughed down seemingly had very little to do with whatever sparked the ill-feelings. He can be seen attending another vehicle shortly after they had paid for there fuel. Coming to assess the commotion, it wasn’t long before the worker got too close to the drama.

Watch: Durban river speeds off after mowing down petrol attendant