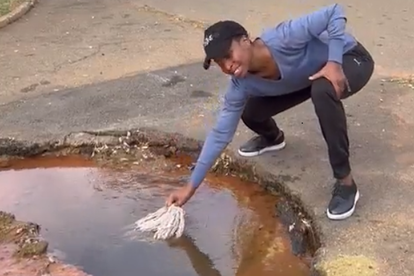 The City of Tshwane has noted the giant pothole which surfaced in Pretoria West this week – Photo: Twitter

The City of Tshwane has noted the giant pothole which surfaced in Pretoria West this week – Photo: Twitter

Unless you drive a tank, we wouldn’t recommend making your way through this part of Pretoria any time soon: An enormous pothole – big enough to swallow a household mop – has been reported to the Tshwane Municipality.

Footage taken from the scene shows a group of concerned residents stood over the chasm, which has since filled with water. At a minimum, this pothole – located on the corner of Talbot and Coke Street in Westpark – is around 4ft deep, with a very similar width. Quite frankly, the void is a danger to residents.

One onlooker comments on how much of a threat such a pothole poses to children – but we can honestly say that it can be classed as a serious hazard to EVERYONE in the community – as well as their domestic implements.

One gatvol local decides to show those filming just how far down the pothole goes. Her mop becomes totally submerged in the water, barely touching the bottom. Needless to say, this can’t be left as it is now…

I’ve been saying how @CityTshwane does not take it’s residents’ pleas for service delivery seriously ???????????? This is such a dangerous hazard for our community.

The video shared online has spread like wildfire, and even the City of Tshwane’s Twitter account took notice of this clip. Let’s be honest though, it would have been nigh-on impossible to ignore.

Reaching out to the complainant, officials working for the Tshwane Municipality confirmed that a report has now been filed, and workers will soon attend to the Pretoria West pothole. Not a moment too soon, either…

“Good evening, and thank you for alerting the City of Tshwane. The relevant department has been notified, and a call with the reference number of 6000644366 has been logged on our system.”