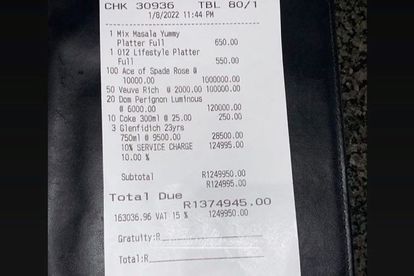 A lifestyle restaurant/bar in Pretoria probably had its most profitable night on Saturday, 8 January 2022, when a patron forked out more than R1.3 million on expensive alcohol. Someone managed to get a snap of the ridiculous bill and shared it on Facebook and fellow users of the app can’t imagine how that much money is spent in just several hours.

The receipt shows that exactly R1 374 945 was spent on mostly booze at 012 Lifestyle Brooklyn, which is in Brooklyn Mall in Pretoria. According to the Facebook user who shared the picture of the receipt, the patron was at the club for less than six hours – whoever paid that bill must have money to burn. The slip also shows that the lucky waiter who served the patron and his guests, got a R124 000 tip.

The restaurant has confirmed the staggering bill to The South African.

A NIGHT TO REMEMBER: MORE THAN R1.3 MILLION SPENT ON

So how does a bill at a lifestyle restaurant and bar even get to R1.3 million? Well, let’s breakdown what was supposedly ordered and exactly how much it costs.

Some Facebook users who commented on the picture of the bill however, believe there is something much more sinister at play, suggesting that the patron was actually laundering money, under the guise of making it rain in the club. Others questioned the authenticity of the bill, specifically asking how the establishment could even afford to have so many bottles of expensive champagne in stock.