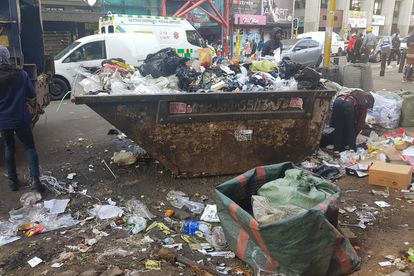 The overflowing skip on the corner of Small & Pritchard has kicked up an almighty stink – Photo: Twitter

The overflowing skip on the corner of Small & Pritchard has kicked up an almighty stink – Photo: Twitter

How has it come to this? A bustling street in the Central Business District of Johannesburg has been labelled ‘filthy and disgraceful’ by prominent locals. That’s because rubbish is now overflowing from a skip on the sidewalk, making it ‘almost impossible’ to walk past.

A number of city dwellers have raised complaints about the area around Small & Pritchard Street. Indeed, the actual location of this mounting trash pile is another source of disbelief. It sits right outside the High Court of Johannesburg, with legal officials often impeded by its presence.

Some of the country’s top attorneys, advocates, and even judges have to walk past this municipal mark of shame. As do thousands of commuters and residents, throughout the course of a working day. Some gatvol residents have taken to venting their frustrations online…

The area around the skip on Small & Pritchard Str in CBD is looking like this again.
There is hardly any pavement left to walk.
It was fixed during visit of late mayor Matongo, just over a year ago.@CleanerJoburg@CityofJoburgZA@txmendrew1@WendelBloem1@mphophalatse1 pic.twitter.com/K7CkAE2NMh

‘They cannot be exposed to this filth’ – Herman Mashaba weighs-in…

The overflowing skip is an issue that many feel must resolved swiftly. However, according to Herman Mashaba, things don’t appear to be that straightforward. The ActionSA leader is now imploring the courts to give the City of Joburg ‘more support’ in applying its by-laws.

I hope our Judges assist and allow the @CityofJoburgZA to apply its By-laws. They cannot be daily exposed to this filth before entering their Chambers @GillianYoungBe1 pic.twitter.com/DHzuY0mjJs

ActionSA say that, although their hands are tied in some respects, they have got people attempting to resolve this issue. Advocate Gillian Young, who works for the party’s senate, also lambasted the state of the street – but further stated that efforts to make a change have fallen flat.

“This [mess on Small and Pritchard Street] is what us lawyers working in Johannesburg have to pass through, when walking from the parking lot to court and back again. It’s a disgrace, and we have actively tried to do something about this.”