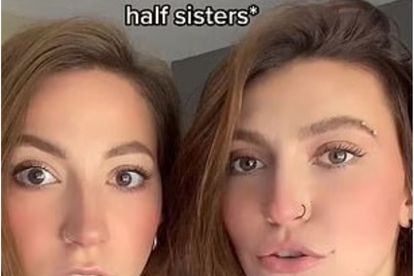 lesbian couple finds out they could
photo source: TikTok screengrab

lesbian couple finds out they could
photo source: TikTok screengrab

A lesbian couple recently revealed they could be half-sisters – but the kicker here? They have no plans of ending their potentially incestous relationship, The New York Post reports.

Carley Gonschior and Mercedes Stewart have been together for two years and live in Canada and made the shocking announcement on their TikTok page just recently. This would make for a rather juicy storyline on The Bold and The Beautiful. According to the pair, they discovered that both their mothers had an affair with the same man.

“When u find out 2 years into dating that ur moms both slept with the same guy,” their video was captioned in part on the video-sharing app.

“Should we take a DNA test?,” they also wrote.

IS THIS LESBIAN COUPLE REALLY RELATED?

There has been a wave of reaction to the couple’s TikTok video, which has been viewed at least 6.9 million times.

Users of the video-sharing platform were quick to point of their striking resemblance, with one saying: “That could explain why you two look like sisters….”

“When I first saw u I thought u were sisters,” one person wrote, while another said: “I HAVE ALWAYS SAID Y’ALL LOOK RELATED”

When one user suggested that they take a DNA test, they replied: “We’re scared.”

But, there were others who thought their story was just way too wild to be true, with one saying: “I can’t tell if this is real or just a TikTok joke…?”.

Another person added: “I feel like this is a joke but [you] do [for real] look exactly the same.”

Carley and Mercedes also questioned whether it would be “wrong” to continue dating each other, if they find out they are indeed related, writing: “If we’re actually related is it wrong to stay together?”