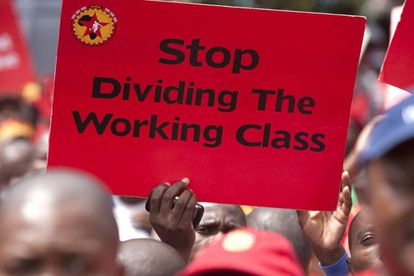 Members of the National Union of Metalworkers of South Africa (Numsa) are expected to stage a demonstration outside the offices of ArcelorMittal across the country on Monday, 20 July 2020.

The picket will begin at 08h00 and a memorandum of demands will be handed over by 10h00 and will take place in Sedibeng, Vanderbijlpak, Vereeniging, Pretoria and Newcastle.

The unions says the steel company is contemplating retrenchments and is in the process of consulting employees – but has also proposed a 20 percent salary reduction as an alternative to shedding jobs.

The union has lashed out at the management of the JSE-listed steel producer, accusing it of ill-treating workers.

“Members of the National Union of Metalworkers of South Africa (NUMSA) will be picketing at all the offices of ArcelorMittal in South Africa. Our members feel that they must resort to this drastic course of action because of the relentless onslaught that AMSA through the backward management of Kobus Verster the current GCEO, have launched against employees”, said Numsa spokesperson Phakamile Hlubi-Majola.

‘Arcellormittal using COVID-19 as an excuse’

Arcellormittal SA is reportedly considering laying off employees and has been further accused by Numsa of using the COVID-19 pandemic as an excuse to restructure the company and leave employees without work.

“AMSA is in the process of consulting employees as part of section 189 process, and is contemplating retrenchments. It has also proposed that salaries and benefits must be reduced by 20 per cent as an alternative to retrenchments. We believe that the covid19 pandemic is being used as an excuse to restructure the organization, and render hundreds of workers jobless”, Hlubi-Majola further said.

“Our members are acutely aware of the risks associated with the covid19 pandemic, but they feel that they have no choice but to resort to protest action. They will picket peacefully whilst adhering to social distancing regulations”

The situation is similar to back in July 2019, when the steel manufacturer had also said it was  mulling a large-scale restructuring exercise which might affect more than 2000 jobs. It had sent out a notice to unions stating it would have to resort to retrenchments due to  a difficult domestic economic environment.