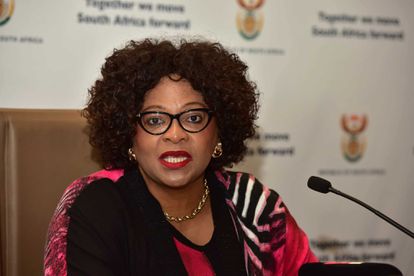 Nomvula Mokonyane, the former Minister of Environmental Affairs, has told the Zondo Commission into State Capture that she was never the beneficiary of a bribe from former Bosasa boss Angelo Agrizzi.

Mokonyane is currently under the spotlight at the State Capture Inquiry testifying with regard to her role in alleged corruption involving Agrizzi, who claimed to have paid the minister kick-backs in the form of security upgrades to her home, financing for the funeral of her son, as well as monthly payments amounting to over R50 000.

Mokonyane said that Agrizzi’s allegations against her were not only untrue, but that they had affected her on a personal level, to the extent that she want to go on record to “clear her name and get her life back”.

“I find the admissions to be defamatory,” she said. “They smack of hatred and an act of excessive desperation and an attempt of destroying the little that is left of my character.”

“He even confused the names as to who has passed on and who has had a drug problem. Precisely because he has other ulterior motives, of which I do not know,” she said.

“I take serious objections in him saying they paid the burial costs for my son. To claim that Bosasa buried my son is a serious offence,” Mokonyane said.

She accused Agrizzi of belittling her family, culture and bereavements, tearfully explaining that he could not distinguish between her two children.

On late Bosasa CEO Gavin Watson, Mokonyane said that he had shown her generosity, but not the kind that comes in brown envelopes.

“I have known their generosity when there was no tender. When they used to support the detainees and underground operations. Their relationship with the ANC… it was a natural relationship of fellow fighters coming together.”

Mokonyane maintained she never dealt with Agrizzi directly and said he lied about her asking Bosasa for donations. However, she did concede that Bosasa had been contacted to assist her with an electricity complaint at her home.

“I have never been in a meeting with Mr Agrizzi and he is also not a personal friend or anybody who I can have a social interaction with him. I would come across him at Bosasa,” Mokonyane said.

“I don’t have the capacity to store these volumes that Mr Agrizzi is referring to. I have never benefited nor received any goods to the benefit of my family.”

“I have been employed and those who know me, post December 16, my family closes off. We go on holiday. We come back on December 30 to be with my family. “This is not true,” Mokonyane said.