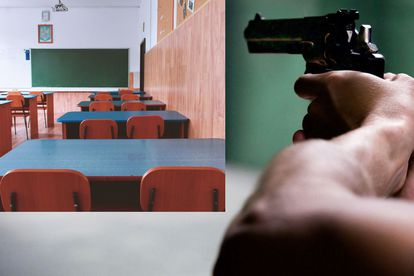 The teacher who was shot and killed outside a school in Rustenburg on Wednesday has been identified as Samukelisiwe Penelope Nxumalo.

Nxumalo was brutally murdered outside the Rutanang Primary School gate, in Geelhout Park. The shooting took place at approximately 07:00.

The North West education department on Thursday morning closed the school for the remainder of the week.

SCHOOL CLOSED AFTER KILLING OF EDUCATOR

According to the department of education spokesperson Elias Malindi, the school was closed temporarily to allow the send-off process to run smoothly.

Parents received letters from the department, requesting them to take of the learners while they are at home during this time.

“A recovery plan will be implemented as soon as learning and teaching resumes on Monday,” added Malindi.

“On behalf of the department l am extremely angry by the situation. I strongly condemn this horrible incident that happened in front of our school. I am totally disappointed that all the social ills from the community are finding expression in our schools.

“Our communities are the reflection of what is happening in our schools. Now it’s time as a society we reflect on these challenges facing our schools. I believe the police will find those behind the horrible incident”,

She further conveyed her condolences to the family of the bereaved educator and the entire school community.

TEACHER SHOT IN FRONT OF THE SCHOOL GATE

Police are still searching for the two men behind the brutal murder of Nxumalo.

Nxumalo was in her Toyota Fortuner vehicle in front of the school gate, when two unknown men approached and shot her at close range.

Thereafter, the suspects then walked away from the scene on foot, without taking anything, according to police spokesperson Brigadier Sabata Mokgwabone.

“The motive of the incident is yet to be determined. Investigation into the matter continues,”

The Provincial Commissioner of North West, Lieutenant General Sello Kwena has since called for the mobilisation of the 72-hour Activation Plan following the ruthless murder.